Apple spends much less than its competitors on startup companies

It is common knowledge that Apple is richer than any other technology company across the globe, expected to hit the trillion-dollar mark in 2018. Perhaps unsurprisingly to some, it is also the company that has spent the least on startups than its rivals in the Big Five of US technology firms.

Crunchbase News has analysed the top tech companies in the United States, concluding that Apple spends far less on mergers and acquisitions (M&A) since 2013 than Facebook, Microsoft, Google and Amazon, despite having more money than any of them.

Out of its $5.1 billion acquisition value, $3 billion came from the sizeable purchase of audio company Beats Electronics in 2014. The remaining $2.1 billion is made up of 11 private firms in which each purchase has a documented figure. There are still 44 private companies, particularly made up of early-stage startups that went purchased for an undisclosed sum that is likely to be significantly below the $100 million margin. 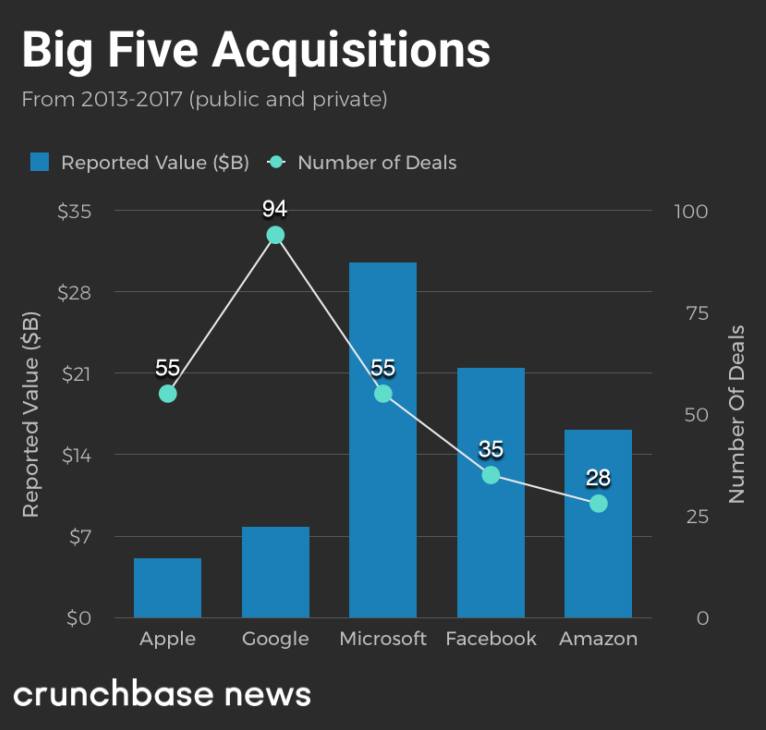 Despite the much lower value of spending, these 55 private company acquisitions go on to place Apple in joint-second place for buying startups, alongside Microsoft and only beaten by Google’s 94 deals since 2013. In fact, Amazon seems to have made the least acquisitions, with just 28 firms, followed by Facebook’s 35.

Perhaps Apple’s $400 million acquisition of Shazam is a step in the right direction for the company, with Joanna Glasner of TechCrunch predicting that the company might be gearing up for a spending spree based on US tax code changes resulting in bigger domestic holdings and Apple’s latest trend of prioritising US manufacturing. That being said, Apple gained its pole position by spending wisely, not spending a lot.

KitGuru Says: “Apple always copies” is perhaps the most common sentence I hear anti-Apple protesters say about the company’s latest efforts, but could this lack of spending equate to its apparent lack of ideas? Either way, Apple usually does what it does well and sets the trend for others to surely follow. It would be unfair to think the company doesn't know what it's doing.