Designers are already pondering what a foldable iPhone would look like

Samsung launched its flexible smartphone/tablet hybrid earlier this week, aptly named the Galaxy Fold. Given that the company has a two-year lead on the technology needed to create such a device, it’s not likely that Apple will debut its own version any time soon, but that hasn’t stopped designers from trying their hand at what they think could be in store for the future.

At the request of Foldable News, Dutch 3D artist Roy Gilsing unveiled his take on a flexible iPhone. Plucked purely from his imagination, the concept takes a lot of inspiration from Apple’s Mac devices with its sleek, grey appearance, while seemingly opting for Samsung’s hole-punch cutout for front-facing cameras. 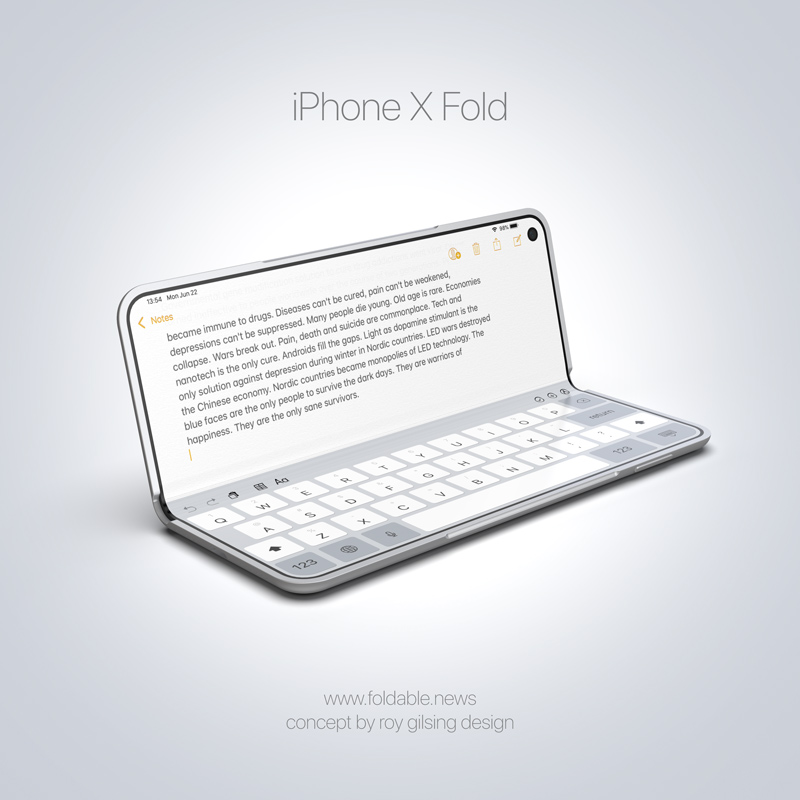 While the Galaxy Fold is significantly slimmer than the prototype that revealed the Infinity Flex display, Gilsing’s concept dares to go even thinner. The likelihood of this is almost certainly a long way off that could prove even further out of reach if Samsung chooses not to license its technology out to Apple.

Gilsing’s colloquially dubbed “iPhone X Fold” concept retains the dual screen design, unfolding to reveal a tablet-sized 2:3 display. One of the main differences is that the smaller 1:3 cover panel sports the divisive notch popularised by the original iPhone X. There are also many cameras missing, considering the Galaxy Fold sports six in total.

Perhaps the best aspect of the make-believe design is the ability to use the “iPhone X Fold” as a miniature notebook by unfolding the hinge half way. This splits the bendable screen into two segments, with the bottom part of the touchscreen acting as a keyboard. Although this is an idea that is hopefully implemented on devices in the future, it is likely much easier to implement on iPhone devices given Apple’s control over iOS rather than relying on Google to update its Android support.

KitGuru Says: Given that Samsung’s Galaxy Fold is already an exorbitant $2,000, it’s unlikely that a foldable iPhone would be much cheaper. If Apple were to debut its own foldable mobile device in the future, how much would you be willing to pay?

Previous Nvidia launches its GeForce GTX 1660 Ti starting at £259.99
Next Epic Games’ lawsuit against Fortnite Live event has shut down the company behind it