Apple is currently preparing its iPhones for the launch of the Apple Watch, according to the latest iOS 8.2 beta update. The beta update includes a new setting in the Bluetooth menu, letting users know how to pair their device with an Apple Watch.

The pairing process is a little different compared to other Bluetooth devices, you won't be able to actually pair the device through the settings menu on the iPhone. Instead, you will need to open up the Apple Watch app, which will then let you pair up your devices and set new apps to install on the Apple Watch. 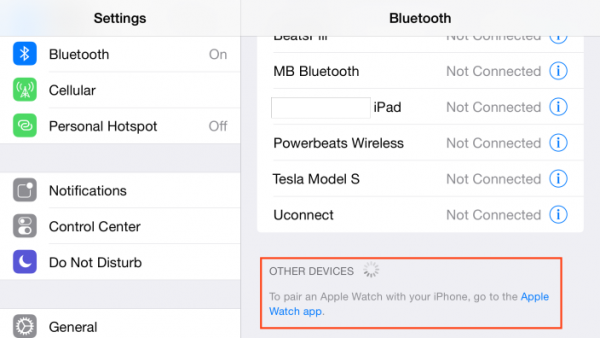 Apple's new wearable will only be compatible with the iPhone 5 and upwards, so those still using an iPhone 4S or older won't be able to use the watch.

KitGuru Says: It makes sense for Apple to launch its first smartwatch in March if the company wants to meet its ‘early 2015' release window. The company has high hopes for the wearable so it will be interesting to see how it is received on launch.