Although whispers of Razer’s second generation smartphone appeared as early as August, its earnings report earlier this week gave hard confirmation on the existence of the handset. Although details remained under wraps, the tentatively titled Razer Phone 2 has appeared on Geekbench, giving a first-look at its potential specifications.

According to the Geekbench results uploaded on September 6, 2018, the Razer Phone 2 will sport 8GB of RAM similar to its predecessor, while swapping out Qualcomm’s Snapdragon 835 for the current flagship Snapdragon 845. Although, this isn’t explicitly shown by name, its identifier is identical to other models sporting the chip currently on the market.

The bump from 4 cores to 8 certainly shows, with the Razer Phone 2 showcasing a single- and multi-core score of 2026 and 8234 respectively, an impressive increase over its predecessor’s score of 1733 and 3905. That being said, it’s still noticeably lower than competition already sporting the Snapdragon 845. Fans shouldn’t be discouraged by this, however, given that the upcoming device still has a lot more time in the oven before its supposed December launch. 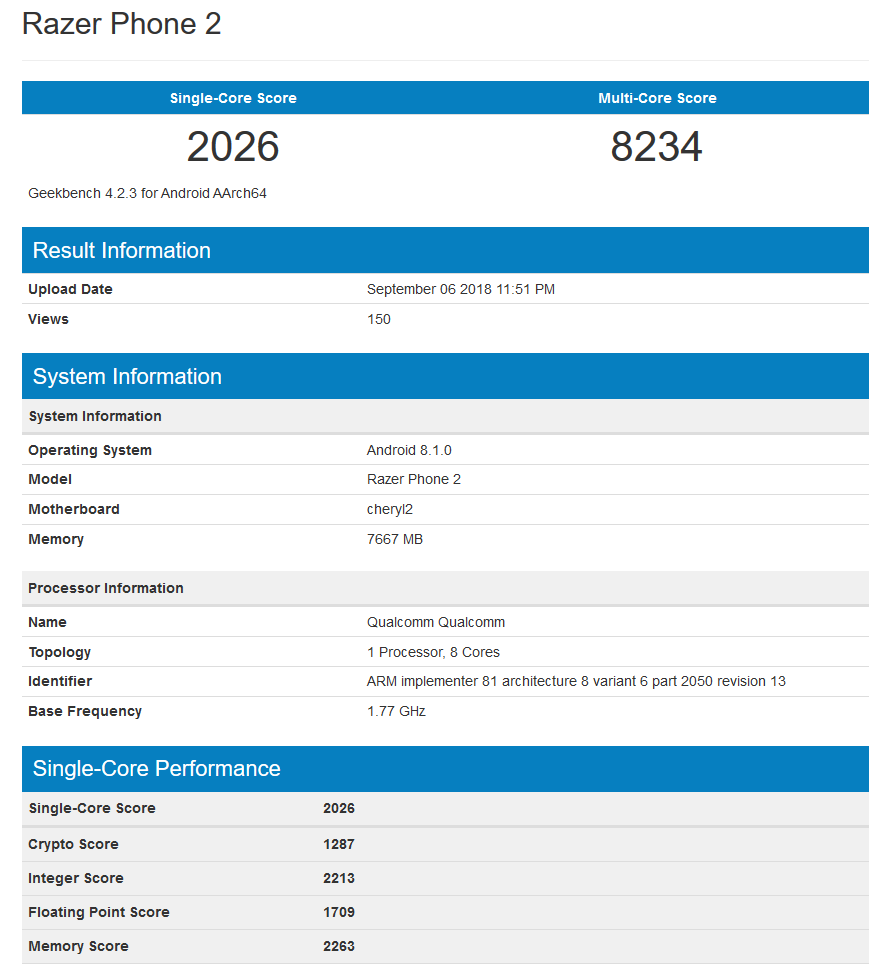 Razer angled its first-generation smartphone as the perfect gaming machine with its 5.7-inch 1440p LCD pushing 120Hz. It’s expected that the Razer Phone 2 will similarly focus on its gaming elements, however it is currently unknown whether it will adopt OLED display technology similar to other flagships.

The firm has hinted at the direction its next-gen device will take as it takes the experience it has with its PC software and migrates it to the mobile market, potentially including Razer zGold wallet, the Razer Game Store and ‘Razer Pay’. Word also has it that the Razer Phone 2 will come with Android Oreo out of the box, promptly updating to Android Pie sometime after its launch – provided carriers ensure the delivery of the update.

There are still a lot of questions surrounding the tentative Razer Phone 2, so it’s advised that this speculation is taken with a pinch of salt for the time being.

KitGuru Says: Now that ASUS is tackling the mobile gaming market with its own smartphone, it will be interesting to see if this pushes Razer to innovate the scene further. What would you like to see in the Razer Phone 2?