While the main hardware news this week has focused on what’s happening at CES, there are other hardware launches happening at the same time. Samsung has revealed a new line of external SSDs, the T7 Touch series.

Samsung claims its new T7 Touch Portable SSD series delivers lightning-fast transfer speeds while offering the new standard in security, all crammed into a convenient and durable pocket-sized form factor for excellent portability and connectivity since the T7 Touch is based on the USB 3.2 Gen 2 standard.

“Consumers who are constantly on the go between work, play and passion projects want to be able to securely carry their content with them,” said Dr. Mike Mang, vice president of Brand Product Biz Team, Memory Business at Samsung Electronics. “Now their data is secure thanks to the fingerprint recognition functionality incorporated into the product, which delivers industry-leading transfer speeds in a compact form factor.”

The Samsung T7 Touch portable SSD is designed with both professional and casual users in mind by providing enough capacity to store large amounts of data such as 4K/8K video files, a huge amount of images or be used as an additional storage device for gamers on consoles, PC’s tablets and even smartphones. 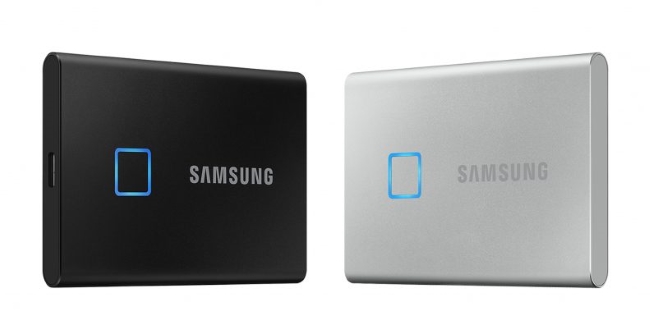 T7 Touch offers significant transfer speed improvements over previous storage solutions with read and write speeds of up to 1,050/1000 MB/s which is approximately twice the performance of its predecessor, the T5 and up to 9.5 times the performance of other external drives equipped with traditional, mechanical HDDs.

Samsung has brought built-in fingerprint security to the T7 Touch, which is a first for this type of external SSD and adds another level of security on top of AES 256-bit password protection. The T7 Touch series is available in capacities of 500GB, 1TB and 2TB with a choice of either black or silver colour casings and USB Type-C connectivity.

KitGuru says: External SSDs seem to be overtaking traditional mechanical HDD based external devices these days due to their superior transfer speeds and increasing capacities. What do you guys think of these new devices from Samsung?