Chromebooks have been available on the market for almost 10 years. It was initially speculated that device would prove a great success with its convenient design and functionality. However, to date Chromebooks only make up about 1% of the market for laptops and tablets. This is something that Samsung is looking to change with the launch of its new Samsung Galaxy Chromebook.

Samsung is not afraid of inventing and trying out new technologies – whether it be monitors, earbuds or batteries. Now the Korean company is innovating again and is launching a new convertible Chromebook, called the Samsung Galaxy Chromebook.

Right off the bat it's worth mentioning that Samsung has succeeded with producing the “thinnest convertible Chromebook” since January 2018. The Chromebook only measures 9.9 mm and it's something that Samsung proudly announces several times on its webpage describing the product.  Even though the company is happy about how thin its product is, the Samsung Galaxy Chromebook has even more to offer. 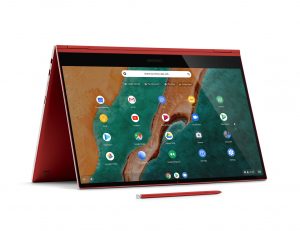 Samsung Galaxy Chromebook ships with a 10th generation Intel Core i5 processor and 256GB storage. When it comes to the visuals, Samsung's product comes with a 4K screen, using an AMOLED panel instead of a traditional LCD. The Chromebook also features a fingerprint sensor and can boot in as little as 6 seconds.

The Chromebook from Samsung is already available for shipping in the US with the price starting at $999. Samsung Galaxy Chromebook is expected to start selling in the UK soon.

KitGuru says: Do you have a Chromebook in your possession? What do you think of Samsung's new product?