It's often new smartphones which grab the headlines during MWC, but this year Huawei has bucked the trend by announcing a brand-new laptop to its MateBook family, while a couple of new MediaPad tablets have also been unveiled by the Chinese company.

The main announcement was undoubtedly the revealing of the MateBook X Pro. The successor to last year's MateBook X – which was actually Huawei's first venture into the laptop market – the MateBook X Pro looks like a fantastic device. I know because I was able to get hands-on with one last Thursday at a media pre-briefing in London. Here's everything you need to know, along with some early thoughts.

Note: if the above gallery is not displaying properly, you may need to disable your ad block software as they can interfere with out display code.

In a nutshell, the MateBook X Pro is a premium laptop that looks to strike a perfect balance between performance and portability. It weighs a mere 1.33KG, and at its thickest point it measures only 14.6mm. Despite that, the aluminium unibody feels quite sturdy and strong, while it also has a unique sandblasted finish which feels great to the touch.

Its display was the real kicker for me, though, as not only does it have incredibly tiny bezels (with a 91% screen-to-body ratio) but the 13.9-inch panel is also razor sharp thanks to its 3000×2000 resolution. With a new touchscreen interface, as well as a 1500:1 contrast ratio and 100% sRGB coverage it looks great for work as well as play. From my time with it, it also looks seriously bright, but I'd have to verify that in a different environment as we were in a fairly dingy room.

Lastly, other key features include a fingerprint-enabled power button which should be able to detect your fingerprint as you turn the device on, and thus remove the need for a Windows log-in page. Huawei told us a cold boot to the desktop takes just 7.8 seconds – which, if we can verify to be accurate, is hugely impressive. There's also support for second-gen Dolby Atmos technology via a new quad-speaker setup, a funky recessed webcam hidden between the F6 and F7 keys, as well as a spill-proof back-lit keyboard.

We'll be getting a MateBook X Pro in for review very shortly so keep your eyes out for that. 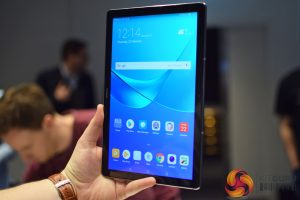 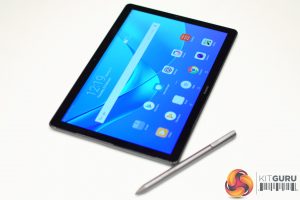 Elsewhere, we were also shown three new tablets which come under the MediaPad M5 banner. First of all, we have 8.4in and 10.8in MediaPad M5 SKUs, but there was also a MediaPad M5 Pro designed for productivity – only in the 10.8in form-factor, however.

All three tablets have 2560×1600 displays, aluminium unibodies and Kirin 960 chips with integrated machine learning. For the tablet photographers out there, a front-facing 8MP camera and a 13MP rear shooter should hopefully keep you happy as well.

In term's of the 10.8in Pro model, this keeps the same core spec as the non-Pro model, however Huawei has designed a new pen for the device, dubbed the M Pen. This features 4096 levels of pressure sensitivity with support for tilting and shading as well. The M pen comes in the box with the MediaPad M5 Pro, but it is not compatible with the other non-Pro tablets.

KitGuru says: Getting a look at hardware before its been officially announced is always fun, and I was particularly impressed with the MateBook X Pro during my time with it. The new MediaPad M5 tablets also look like solid offerings, so be sure to check back for our reviews in the near future.

Previous Is there a ‘perfect’ weight for a gaming mouse? KitGuru investigates
Next Metal Gear Survive devs leave a message for Kojima Productions