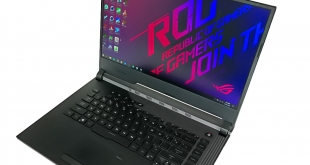 Deploying Nvidia’s RTX 2070 GPU alongside the new Intel Core i9-9880H eight-core CPU is a guaranteed way to get gaming laptop enthusiasts to pay attention. That’s exactly what ASUS does with the new ROG Strix Scar III G531GW gaming laptop. But rather than simply settling on a powerful combination of GPU and CPU, ASUS ups the fight by equipping its premium, yet not oversized, offering with a 15.6” 1080P screen that can run at 240Hz. No, that’s not a typo – 15.6 inches of 240Hz gaming laptop goodness.

Tipping the scales around the 2.4kg-mark with its 66WHr battery, the Scar III is deceptively slender for a gaming laptop packing significant punching power. Almost comfortably backpack-able, we’d say.

Arguably this laptop’s main feature, the 15.6” 1920×1080 screen is, subjectively, superb. There’s no denying that 240Hz is probably overkill for most people and even enthusiast gamers. However, the swift 3ms response time and high refresh rate do indeed combine to make for an enjoyable viewing experience. For those who are particularly fond of esports games or titles such as CS:GO, the higher refresh rate of ASUS’ chosen screen may indeed be a decisive factor, even if it is challenging to get FPS values past a lofty 200. 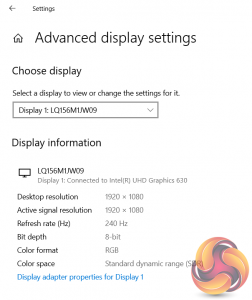 What I was particularly impressed by was the image quality of the LQ156M1JW09 screen. ASUS refers to the panel technology as ‘IPS-level’ and quotes 100% SRGB coverage; colours were bold in games and I was pleasantly surprised by the uniformity of the backlighting on our sample. Speaking of backlighting, I managed to use the G531GW at full brightness outside in intense (by UK standards) sunlight without too many issues, though the screen is not the most anti-reflective unit that I have personally seen.

Special mention must go to the slim, 6-7mm bezels that give ASUS’ Scar III G531GW a screen-to-body ratio of 81.5%. One caveat of those slim bezels, combined with potential security and tin-foil-hat resistance, is the lack of a built-in webcam. Perhaps we can all agree that no webcam is better than the much-criticised nose-cam that has seen increasing popularity.

The Core i9-9880H is an eight-core, sixteen-thread Coffee Lake architecture CPU built on Intel’s 14nm++ manufacturing process. The chip clocks in at 2.3GHz on the base frequency, can boost as high as 4.8GHz under the correct conditions, and features 16MB of L3 cache. Despite the CPU’s extra pair of cores versus 8000-series predecessors, TDP is maintained at 45W and could become a challenging factor when trying to avoid power-induced throttling. Whichever way you swing it, the Core i9-9880H is a mobile CPU powerhouse that looks capable of mixing it up with decent desktop chips.