Acer is making a gaming tablet

Nvidia has enjoyed much success with its highly praised Shield tablet over the last year or so but it won't be the only gaming-oriented tablet on the block for much longer as Acer has plans of its own. Acer has announced that it is going to release a Predator Android gaming tablet this year.

This is all part of Acer's effort to invade the gaming market. It has recently launched some high quality G-Sync and Freesync monitors for gamers, along with a highly sought after 1440p 144Hz IPS panel to rival the Asus ROG Swift. Acer also has its own line of Predator Desktop PCs and laptops in the works. 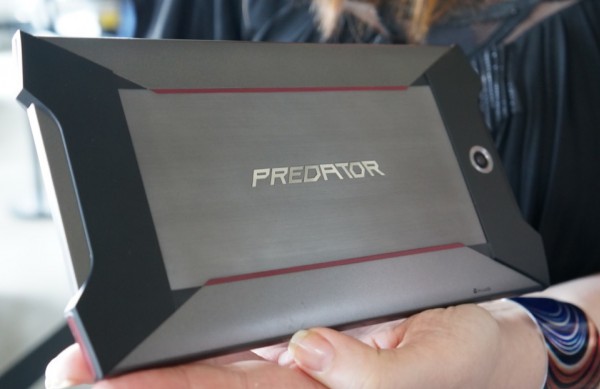 For now, the internals are not yet known but according to TrustedReviews it will use an Intel ‘Cherry Trail' CPU and Acer is apparently confident that it will benchmark higher than the Nvidia Shield. The Acer Predator tablet comes in a slightly pointy design, with a red and black color scheme to round off the ‘gamer' look.

The tablet will also make use of four front facing speakers in total, in an effort to better create a ‘surround sound' listening experience. Unlike the Shield though, the tablet won't have a dedicated controller built for it, although third-party peripherals will be supported.

Aside from that, details are light, we don't know when exactly the tablet will launch or how much it will cost. We don't even have the full spec sheet. However, it does seem that Acer is making a big push in the gaming market this year.

KitGuru says: Acer has been gaining traction in the gaming market thanks to its new Predator gaming monitors. Offering a 4K G-sync display, a 144Hz IPS QHD G-sync display and a Freesync display to boot. However, despite its renewed place in the monitor market, it might be harder to sell an Android tablet, especially when Nvidia has had a head start with its own.

Previous Someone updated Man of Steel with color and it looks better
Next Luxottica CEO says company is working on Google Glass 2.0