Earlier this year, we heard that Samsung was experimenting with a massive 18.4 inch tablet, potentially in response to Apple’s own 12-inch iPad Pro, which was heavily rumoured for some time prior to its announcement back in September. We now know quite a bit more about the Galaxy View tablet, thanks to the first leaked images appearing online, alongside earlier specification rumours.

It is not often that we see tablets beyond the 10-inch form factor so it is hard to really visualize how large Samsung’s tablet might be. Thankfully, we now have this image from EVLeaks to help with that: 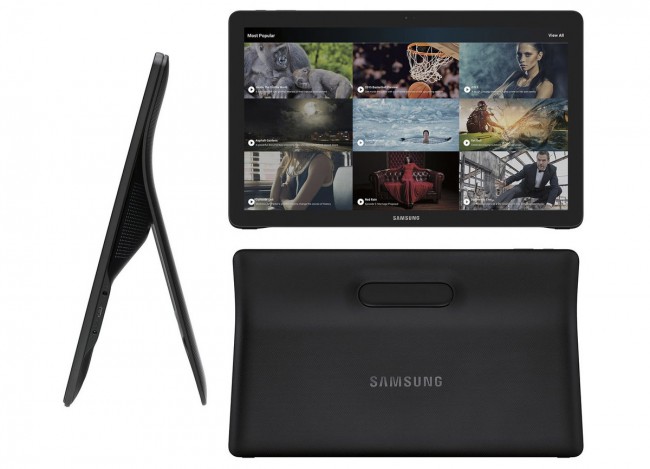 The tablet either has a speaker grill or a handle on the back, along with a pop-out kickstand and what appears to be a very nice display with fairly slim bezels on the sides.

Earlier reports suggested that the screen itself would sport a 1920×1080 resolution, with early prototypes sporting a 1.6GHz processor, 2GB of RAM and 32GB of internal storage. While Android Marshmallow is finally starting to roll out, we don’t know if the Galaxy View tablet will launch with Lollipop or Marshmallow installed at first. We also don’t know who Samsung intends to market this device towards, though speculation suggests professional use.

KitGuru Says: The Samsung Galaxy View is pretty huge as far as tablets go. It will be interesting to see if there is even a market for such a device. Given that we have the first leaked images now, it may not be long before we finally hear something a bit more official.