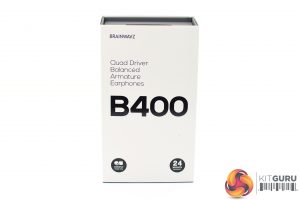 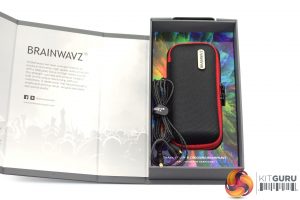 The Brainwavz B400 ships in a pretty minimal white box, with ‘B400’ printed in large bold text on the front.

The box then opens up to reveal a small, hard carry case (with the earphones and accessories inside), as well as a cable for the earphones themselves. 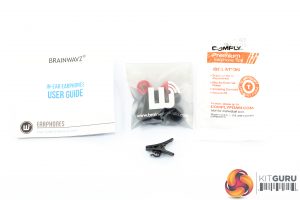 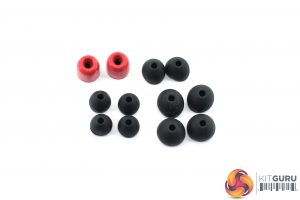 Starting with the accessory bundle, though, in that carry case we find 1x user guide, 1x shirt clip, and then six spare pairs of ear tips – with one pair already installed on the earphones.

For those interested, there are a total of 6 pairs of silicon ear tips – two small pairs, two medium and two large – and one pair of Comply T-100 foam tips, the latter being something I am always glad to see. That being said, the 1MORE Quad Driver does come with three pairs of foam tips, although admittedly they are not Comply tips. 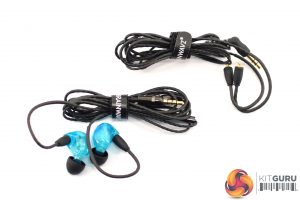 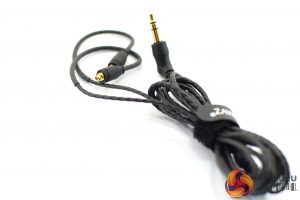 Now, as it turns out, the cable which we were initially greeted with once opening the box is a spare – two sets of cables come in the box which I think is a great inclusion. Both measure 1.25m long and connect to the earphones using the MMCX connector.

What sets them apart, is that the pre-attached cable has an in-line remote with mic (more on that later) and connects via a straight 3.5mm jack. The spare cable does not have a mic/in-line remote and its 3.5mm jack is slightly angled as well. 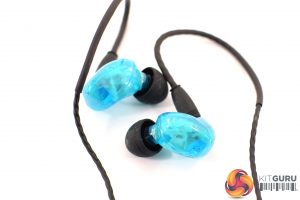 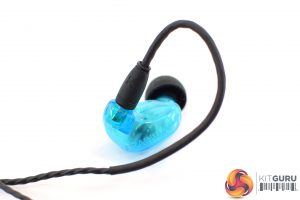 Getting to the actual earphones now, though, the first thing to look at is the driver housing/ear pieces. The most striking thing for me is the colour as I was sent the Aqua model, and on the Brainwavz website there are also options for Stay Frosty (clear), Ruby, Black, Cosmic Black, and Green Rage colours. It looks like only the Stay Frosty model is available to buy in the UK, though.

So, the Aqua colour is very striking and I have to say it makes a change from other grey or black earphones I’m used to. The driving housing itself is also noteworthy as it is actually 3D printed using ‘liquid Resin 3D printers’, which Brainwavz claims enables ‘a shape not possible by normal manufacturing methods.’

On the subject of the shape, these are IEM style earphones which loop over the top of your ears – each cable has a small ear hook to hold them in place. We talk more about comfort and build quality on the next page. 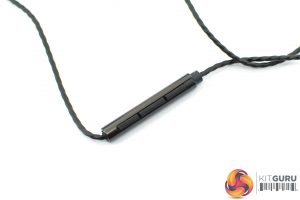 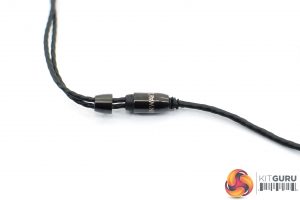 As mentioned, the standard cable has an in-line remote with an in-built mic – this is positioned on the cable leading to the right earphone. You can use the remote to adjust volume, pause/play music, as well as answer calls.

The bifurcation on this cable is also metal plated to ensure durability, with the Brainwavz logo printed onto the metal. 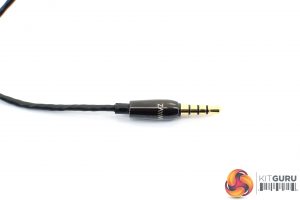 The last thing to note is the 4-pole 3.5mm jack which, as mentioned, is straight. The area where the cable meets the jack itself is also metal plated.