Gigabyte is claiming that the AORUS FI27Q-P is the world's first High Bit Rate 3 (HBR3) monitor, which sounds great, although you probably have no idea what that means. In fact, it refers to the amount of bandwidth available over the DisplayPort link, hitting an overall total of 32.4Gbits/sec, exactly 50 per cent more than the previous HBR2. This allows the FI27Q-P to deliver 2K resolution at 165Hz with HDR and 10-bit colour, all at the same time.

HBR3 was actually launched with DisplayPort 1.3 back in September 2014, so it's surprising that it has taken over five years for monitors to arrive that use it. To make it work you need an HBR3-compatible cable and a graphics card that supports DisplayPort 1.3 and above, but that is quite a few of them now. For NVIDIA cards, a firmware update might be necessary, but quite a long list of GPUs support HBR3, whilst AMD Radeons have been HBR3-compatible at least as far back as the RX 480.

Apart from HBR3, the FI127Q-P has what are relatively normal capabilities for a high-end non-curved gaming screen. It has a 27in diagonal and a 2,560 x 1,440 resolution, two features that sit very well together. The panel technology used is IPS, so you can be confident of good colour fidelity, although official contrast is only 1,000:1, lower than you see with VA panels, and pixel response is 1ms MPRT rather than grey-to-grey.

It's worth noting that typical maximum brightness is just 350cd/m2 as well, which isn't even enough for the basic DisplayHDR 400 standard, dampening the value of HBR3 a little. But the 165Hz refresh is allied with FreeSync 2 and G-sync Compatible status, which means that this monitor doesn't have the NVIDIA G-sync hardware inside but has been accredited as working. Gigabyte also boasts 95 per cent of the DCI-P3 colour space. 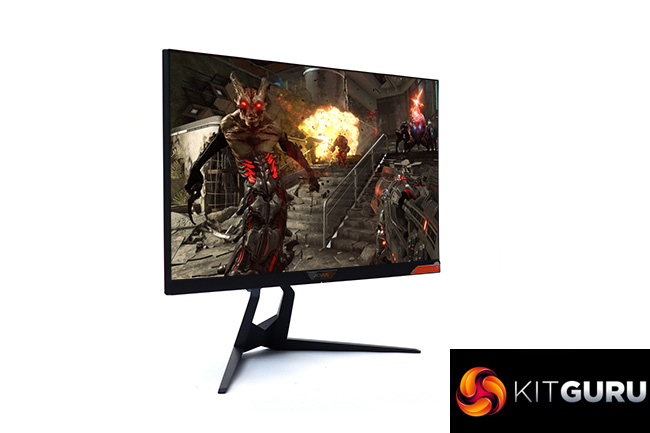 The remaining characteristics are as expected, with two HDMI 2.0 ports and a single DisplayPort 1.4 for video input, but no USB-C. There's a USB 3.0 hub, but only with two downstream ports. Ergonomic adjustments are comprehensive, including tilt, swivel, raise and even portrait mode. There aren't any built-in speakers, but you can plug your headset into the minijacks at the back for headphones and microphone.

There's nothing clearly missing here, but the price of around £460 also seems quite premium when you can get MSI's Optix MAG272CQR, offering many of the same capabilities but in a curved form, for £60-100 less. So you're paying a premium for HBR3. Let's find out if it's worth the extra outlay.