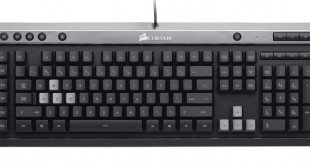 Mechanical keyboards have been popular with the gaming audience now for some time, but they can often be rather expensive. Corsair recently released their K40 gamer keyboard which uses more mainstream rubber domes but takes a leaf out of the ‘mechanical playbook' by keeping the switches separate from one another. It also has macro keys and a fully fledged backlighting system. If your budget is limited to £50 is this the keyboard that you need to shortlist?

It is an attractive looking keyboard and on paper it seems quite impressive – but it compete in a landscape dominated by the mechanical switches of today?