To kick off our testing, lets take a good look at the software. Back when I reviewed the Tesoro Excalibur RGB, I had several complaints about the software suite, unfortunately though, not much has changed over the last several months. 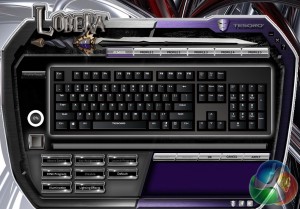 Upon opening up the software, we are met with the familiar main window, with profile tabs up top, customization buttons at the bottom and our view of the keyboard in the center. 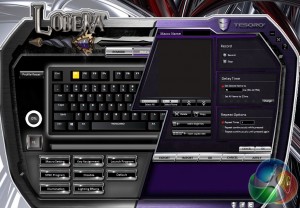 While there are no extra macro keys on the board itself, you can click on any key you wish and set a new function to it, which adds some level of customization to the board. You can also disable any key on the keyboard should you want to. 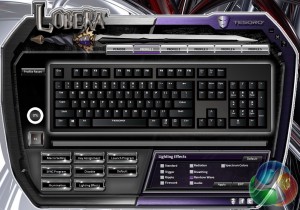 One thing that has improved since the Excalibur RGB is the lighting. Tesoro’s new ‘spectrum’ lighting is very good and the effects work just as well as they do on other flagship boards, from the likes of Razer, Corsair or Logitech.

There are several new effects, including ‘radiation’, ‘breathing’, ‘rainbow’ and ‘audio’. Audio reactive lighting is something that we have not seen on other RGB keyboards, making it quite unique. The idea is that the lighting on the keyboard will react to the music playing on your PC- a very cool feature indeed.

Overall, Tesoro hasn’t really made any improvements to the software so far. In my opinion, it needs a total overhaul if it is to match the quality of software drivers from the likes or Corsair or Logitech.

Now lets talk about the keyboard’s performance. The Lobera Spectrum uses Kailh switches, just like the Excalibur. The problem is, Tesoro apparently doesn’t want you to know that it uses Kailh switches as it is once again not listed on the box anywhere.

People will always have their preference between Kailh or Cherry switches but overall, I have found that both are very good so I see no reason to not list Kailh switches on the box.

The Lobera Spectrum I am testing today comes equipped with black mechanical switches. This is a linear switch, just like mechanical reds, meaning that there is no tactile feedback while typing. As a regular typist, I missed that tactile feedback quite a bit. However, this board does come in blue, brown and red switch variants – so you have options.

Typing on the black switches is unlike any other switch I have experienced. A lot of force is required to bottom out each key compared to other switch types, in-fact it almost feels like the switch is pushing back against me as I type at times.

One thing that I did notice after a week or so of heavy use is that some of the keys, particularly the space bar, started giving off an echo noise. This is also something that I experienced following my review of the Tesoro Excalibur. It just seems to be a characteristic of Kailh’s switches, although I did not find it to be intrusive or annoying at all.

Gaming on the Lobera Spectrum was a decent enough experience. The layout of the keys is fairly standard so you are unlikely to run in to any issues with spacing. Overall, it is a solid keyboard.