First up in our testing is Roccat’s Tyon Driver software, which is home to all of the customization options available for this mouse- including re-programmable buttons and lighting. 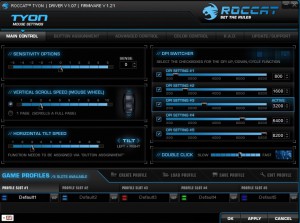 The main control window lets you change sensitivity, scroll speed and tilt speed. The tilt function is specific to the fin switch located on top of the mouse. Additionally, you’ll be able to save and load mouse profiles and change DPI settings from this window. 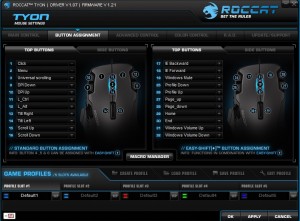 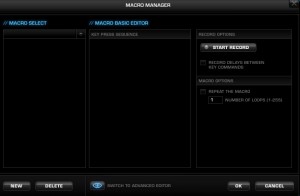 The second tab in the software is dedicated to button assignment, allowing you to reprogram buttons and save specific game profiles for them. In total, you can set up 32 functions with this mouse, which could work out very useful for MMO or MOBA players.

The macro manager allows you to edit and record macros while also being able to set up loops, delays and repeats. 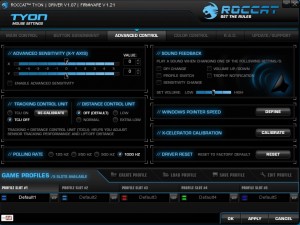 The advanced control section gets a little more in-depth, allowing you to calibrate the X-Celerator switch, edit Windows pointer speed and set advanced sensitivity options. The tracking control unit comes turned off by default but it can help advanced users to adjust the sensor’s performance and lift-off distance.

One neat little feature included with the Tyon is sound feedback. If you turn this on, then the mouse will tell you whenever you have switched profile, changed DPI, earned a ‘hidden trophy’ or changed sensitivity. Having this on will allow you to avoid switching settings by accident, or at least warn you in time to correct it if you are in the middle of a game. 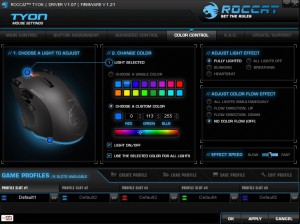 While other parts of the software generally perform very well, color control can be a little sluggish, particularly when saving a new color for the Tyon’s lighting. That said, I did find the quality of the lighting on the Tyon to be very impressive, more so than the more expensive SteelSeries Sensei Wireless. Colors shine bright and don’t leak in to each other- for instance, I didn’t find patches of red in the yellow preset.

We also have some lighting effects, including heartbeat, blinking and breathing. You can also have the Tyon cycle through colors at a pre-determined speed. Overall, this is one of the best lighting suites I have encountered for a mouse in terms of options and quality.

That said, Roccat could do with improving performance when switching between colors, after hitting apply, I found myself sitting there for almost two minutes at a time waiting for the lights to switch on the mouse, which is really disappointing. 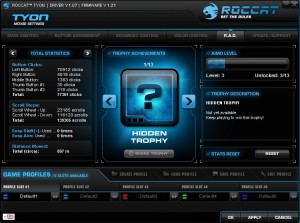 The R.A.D tab gives you statistics on the mouse, such as how many times you’ve clicked each button, total distance moved and how many trophies you have earned, which are unlocked by using the device’s features. 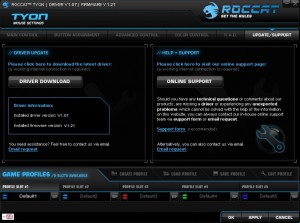 The final tab provides a software update tool and links to support should you need it.

The Roccat Tyon driver software is simple to use and contains a nice layout. It’s not going to blow you away or anything but it definitely gets the job done.

Now that we are done with software, lets talk about actual performance. As I noted earlier in this review, the Tyon is the most comfortable mouse I have ever used, the contours fit my hand perfectly and all of the buttons were easily accessible.

At first glance, I wondered why Roccat made such a big deal out of its X-Celerator switch on the Tyon’s packaging but after playing some Battlefield and flying a few jets around, it became apparent. This little switch is great for piloting aircrafts in games, it won’t be useful to everyone, especially if you don’t play games with airborne vehicles but I quite liked it.

It should be noted that the X-Celerator can be used for driving normal cars in games too but I personally found it less useful in that scenario.

Lets talk about how well the Tyon performs when paired up with the Raivo mouse mat. For those of you that like mouse surfaces with very little resistance for swift motions, then the Raivo might be the mouse mat for you. I can’t say that the granular surface offered me much of a performance benefit when compared to cloth mouse surfaces but I can say that I experienced very little resistance while moving the mouse around, allowing for marginally swifter motions.

People can debate over mouse surfaces all day but essentially its going to come down to what you like. Personally, I usually stick to a cloth mouse mat but I have enjoyed my time using the Raivo and will probably continue to use it after the review process.