AOC established its AGON line of monitors in 2016, catering to esports enthusiasts. This began with the AG271QX and AG271QG each sporting 144Hz FreeSync and G-Sync respectively, while its 2017 second generation upped things to 240Hz. Now, its AGON 3 Series packs 27-inch curved QHD displays with high-dynamic-range.

Until now, HDR has remained relatively exclusive to televisions, coming to the gaming monitor market in the form of eye-wateringly expensive 4K displays. While AOC isn’t the first to usher in HDR at 1440p, its brand new AGON AG273QCG and AGON AG273QCX will help bolster choice.

The AGON 3 Series sits at 27 inches with a 1440p resolution display, 400 cd/m² brightness and an 1800R curvature. Its “3-sides-frameless” design helps shrink bezels down considerably, perfect for a multi-monitor setup. Although the stands differ on each model, the V-shape is made to take up less desk space than ordinary stands, while offering full ergonomic adjustments with height and swivel. And, of course, both share AOC’s traditional built-in headphone holder. 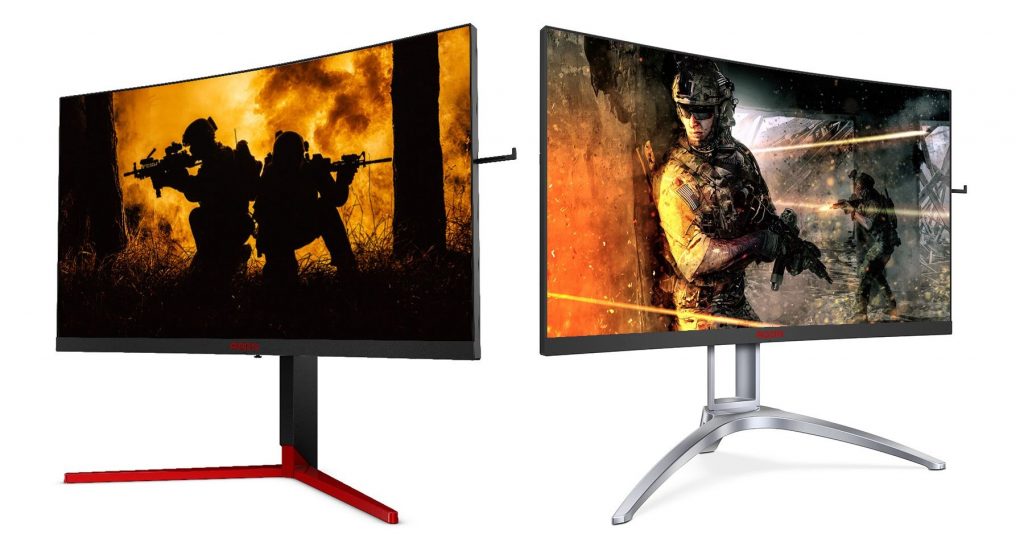 While AOC certainly place emphasis on aesthetic with its RGB AGON Game Lights controlled via the AGON Game Pad, each model also houses a range of proprietary software to improve functionality. AOC’s Dial Point places a crosshair on the screen indefinitely while active, promising to help aim more precisely in first-person shooters, while AOC Game Color helps adjust the colour, saturation and vibrancy of the image on-the-fly, without the need for re-shaders.

AOC’s AGON AG273QCX sports a 1 ms MPRT VA panel at 144Hz refresh rate, which is lower than that of the second generation. Despite this, it improves upon its predecessors by adding AMD’s FreeSync 2 technology, helping push a PC-VESA DisplayHDR 400 standard. This helps image content map directly to the monitor’s native colour gamut and luminance range in order to preserve image quality with HDR.

The AOC AG273QCG opts for a 1ms GtG response time on a TN panel at a slightly higher 165Hz. Catering to Nvidia graphics cards, the firm swaps out FreeSync for G-Sync instead. This combination helped AOC achieve the Red Dot Design Award 2018 for its design of the AG273QCG earlier this year.

Unfortunately, price points have yet to be revealed, however the G-Sync-powered AGON AG273QCG is expected to hit European markets starting in November, while the FreeSync 2-clad AGON AG273QCX will arrive a little later in December.

KitGuru Says: Although it likely won’t happen at launch, the more 1440p HDR monitors there are available, the more likely prices will come down as a result, making the technology much more accessible. It looks like AOC has done a fine job catering to both GPU markets, hopefully starting a trend with display companies.