Home / Tech News / Featured Announcement / Upgrading to high-end ultrawide- is it worth it?

Upgrading to high-end ultrawide- is it worth it?

While my PC has changed many times over the last few years, one thing about my setup has remained the same – my monitors. For years, I’ve used two 16:9 displays, with my main monitor being a 1440p/144Hz ASUS ROG Swift and my secondary being an Acer 4K/60Hz. As a tech enthusiast, I’m always looking to try something new and there has been a boom in popularity for 21:9. I didn’t want to compromise too heavily on refresh rate or resolution, so I went out and picked up an Acer Predator X34. 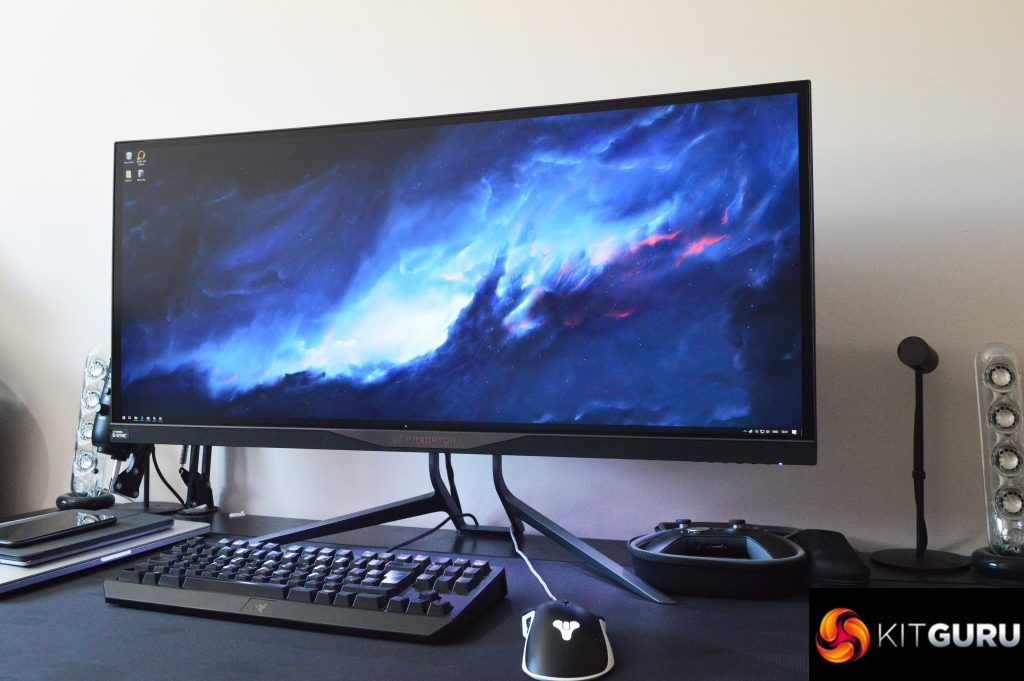 The Acer Predator X34 is a highly recommended monitor, but it is also very expensive and comes with its own unique set of drawbacks. I know many of our readers are considering switching to 21:9, so today I’m going to share my experience and give some advice to those thinking about making the jump. I use this monitor for both work and play, so productivity and gaming will be our two main focus points.

While a multi-monitor setup works wonders for many people trying to be more productive, it had the opposite effect for me. I’d often find myself getting overly absorbed by things occurring on my second monitor, constantly pulling me away from my main task. It was time to simplify and go back down to one monitor. I’m not a big fan of 3840×2160 at 28-inches without scaling, but scaling also means that you lose valuable screen space. My solution for this was to ditch 16:9 entirely and give 21:9 a shot. In order to make the switch worth it, I needed a few key things – high resolution, a larger screen size, and colour accuracy for when I am called on to edit photos. The Acer Predator X34 hits all of these points, with a 34-inch IPS panel and 3440×1440 resolution.

Immediately after switching to the Acer Predator X34, I found it much easier to organise my work flow. The 34-inch screen size is ideal for my desk, and the 3440×1440 resolution is perfect for keeping all of my main applications organised and readable on one display. I can now have my emails open in one corner at all times, and the news team’s shared Wunderlist in a second window right underneath it. I also have two larger windows open at all times, one for writing articles, and another for research. Every tool I need for day-to-day work is now on screen at once, removing distractions.

For me, being able to easily see everything on one display has been a god send. Simply removing the need to turn my head between two displays constantly has been a huge step up. This solution might not work for everyone, but for me, this has been one of the best work-related changes I’ve ever made. I’m sure similar sentiments would be shared by others editing photos, video, or making music.

As I noted earlier, I didn’t want to compromise too heavily on refresh rate or resolution when switching to 21:9. Fortunately, the Acer Predator X34 overclocks up to 100Hz, not every panel can hit this magical number but most of them can at least hit 95Hz comfortably. I picked my monitor up from Amazon and unfortunately, I didn’t win the panel lottery. For the first few days, my X34 did sit at 100Hz, but it eventually started flickering, forcing me to lower the refresh rate down to 95Hz. I’ve been running this monitor at 95Hz for months now without any issues and while there was some initial disappointment at not hitting triple digits, I got over it pretty quickly. In reality, that extra 5Hz isn’t going to be missed, and since I didn’t have dead pixels or suffer from too much backlight bleed, I decided it wasn’t worth the hassle of sending the monitor back and trying again.

When it comes to gaming, the trials and tribulations of 21:9 are well documented. Not every game supports ultrawide monitors well, but I can say that almost every new triple-A game I’ve tried since 2016 has supported it. If you are the sort of person that plays a lot of brand new games, then you should be able to jump in to ultrawide without worry. When it comes to older games, there are some tweaks you can make to force a game to run in 21:9 – the Flawless Widescreen tool includes a bunch of them – but at times, you may need to resort to more complicated methods.

An example of this would be The Witcher 3, which does render in 21:9 during regular gameplay. However, conversations with NPCs will always crop to 16:9, which is jarring and somewhat annoying at times. To get around this, I needed to use a hex editor and edit a string inside the .exe file for the game. Fallout 4 also required some tweaking but you mostly just need to dig through the game’s .ini file to fix this one, which is a less daunting task.

Those are the two key exceptions. Outside of that, everything else I’ve played over the last year has included excellent 21:9 support and as someone who started falling out of love with PC gaming a little bit, this really rekindled my interest. Ultrawide gaming is an experience you can’t get anywhere else, and it is a vastly improved experience over 16:9. Once you get used to that extra field of view, it is really difficult to go back. This goes for just about every genre, from competitive shooters like Rainbow Six, to immersive first-person titles like Prey. The extra field of view is also great for third-person games, like Assassin’s Creed Origins, Gears of War 4 and The Division. I even prefer NBA2K on PC thanks to its ultrawide support.

One thing to consider is that in order to hit that high 100Hz refresh rate (or 95Hz in my case), you will need a good graphics card. 3440×1440 is less demanding than 4K, but it is more demanding than standard 1440p. On a GTX 1080 I found myself hovering around the 60 frames per second mark in most games at ultra settings, but making the jump to the GTX 1080 Ti gave me the boost I needed to fully appreciate games on this monitor. When next-gen graphics cards finally arrive, games will be even easier to run at this resolution, at lower price points too.

Switching to ultrawide was well worth the investment for me. On the productivity front, it is easier to work with compared to 4K, and for gaming you’ll be getting a unique experience that can’t be replicated elsewhere. With that said, this first batch of high refresh rate 3440×1440 monitors aren’t perfect, so there are a few things to consider.

There are plenty of well documented examples of the Acer Predator X34 or Asus PG348Q suffering from backlight bleed, and in some cases, not achieving their full 100Hz overclock. These are expensive monitors (I spent £850 on mine), and at that price, you might not want to play the panel lottery or make compromises at all, even if it is something as small as settling for 95Hz instead of a full 100Hz. Personally, I find the difference between 95Hz and even 144Hz to be extremely minimal but others might feel differently.

The other thing to consider is that 21:9 support is never guaranteed in games – while most titles I’ve played have supported it, you will still see plenty of 16:9 cutscenes and an increasingly small number of games may require extra tweaking. For me, the experience of playing in ultrawide is worth the tiny bit of extra hassle.

If you have the money right now and are itching to get your hands on something new, then I would recommend trying out ultrawide. However, it is worth noting that the Acer Predator X34 and Asus PG348Q are a couple of years old at this point. We already know that new ultrawide monitors are coming down the pipeline, including a 3440×1440 200Hz model from Asus. Once these new monitors launch, it is likely that we’ll see fewer issues with refresh rates and backlight bleed, as the technology will have had a bit more time to mature.

KitGuru Says: Ultrawide monitors are excellent for both work and play, but the current batch of high refresh rate models aren’t perfect. Have any of you been thinking about making the jump to 21:9? Will you be waiting for fresh new monitors to hit the market, or are you thinking of grabbing something already available?