So far we have ascertained that the panel is very well designed and the on screen menu system offers a ‘no frills’ but effective user interface. The image quality is the most important aspect of buying a screen however and while this is a TN based LED display, we have high hopes it will offer a reasonably good image for the modest asking price.

Subjectively when the screen is first enabled we were pleasantly surprised with the default configuration. Most screens arrive with us in a state of disarray, with images so bright and blasted out that 30 minutes of tweaking is immediately required. I was pleased to see full support for various aspect ratios offered for lower than native resolutions, when needed.

The E2472HDD however ships with a very pleasant set of parameters which only required us to make minor tweaks, firstly  to brightness and contrast. The default setting of 3 sharpness (out of 5) was perfect for the high quality HD5670 display output.

We noticed however that whites were never resolved to their purest levels which is always going to be an issue with a TN display, however it was not a major issue unlike some I have tested in the last year. The 3/4 range, between shadows and pure black also had some issues with definition, but again it didn’t ruin the image quality. Granted with some movies which rely on many ‘night’ scenes there will be an issue of resolving the finest black detail.

Viewing angles are decent, but vertically limited to rather tight angles without the images losing colour depth and saturation. Generally if you are sitting at a desk and using this as a computer monitor then it won’t be so much of a problem, but if you have it in a larger room and are showing images to people standing at different heights, then the screen would need to be tilted for maximum impact. Again this is more a limitation of the specific technology rather than an individual issue with the illyama product. Horizontal viewing performance is very impressive and is more than I would have expected from a screen using this technology.

Colour banding across a rainbow pattern was some of the lowest we have recorded with a TN panel and only on a green gradient was it missing a few steps between the upper register and a mid tone graph.

As this is an LED display we are happy to report that light bleed is minimal and backlighting is very even throughout the full diameter of the area. There are only slight +10% variances on the edges which puts this firmly into the top echelons of backlighting performance.

Sharpness deserves a mention as even the finest type was legible and small fonts on screens in a similar price bracket can often smear and blur. For typographers and designers on a budget this will certainly be an appealing purchase decision.

This leads me into one area which I need to highlight. The screen really does need calibrated to get the most from it – colours in particular need slight adjustments as they tended to have a slight tendency to cyan balance than I would like to see. There is also a slight, but not really noticeable dithering noise, only measured by our testing equipment.

Gaming on the screen was very enjoyable and the 2ms refresh rate seems a fairly accurate company statement as I did not notice any smearing at all – blacks are not always ‘pure’ black but it is a minor point to bring up and one which can be improved with a little tweaking in the ATI and nVidia driver panel.

As the Prolite E2472HDD is an LED panel one of the advantages is lower power consumption, and we were stunned to see that under ECO mode it was only consuming 13 watts of power ! At the highest settings we managed to get power consumption up to 23 watts, but this is not really usable under real world conditions. At our configured settings the panel was consuming around 17-18 watts of power. These really are fantastic results.

Previous AVG and McAfee to merge within 6 months?
Next nVidia and XFX burned bridges for good? 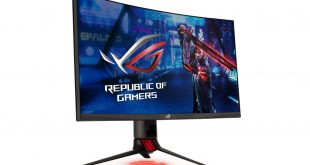