Logitech is adding a new member to its Lightspeed line-up of wireless gaming mice. This time around, the G604 is getting the Lightspeed upgrade, packing a total of six macro buttons on the side and some bold claims for battery life.

With the number of thumb macro buttons included on the side of the mouse, our guess is that the G604 will primarily be aimed at MMO, MOBA and possibly Battle Royale enthusiasts. In total, the mouse comes with fifteen re-programmable controls, which can be adjusted through Logitech's G HUB software.

On top of the mouse, you will also find a Lightspeed switch, which can be used to swap between two wireless connectivity modes- 1ms Lightspeed or Bluetooth. You can also have the mouse paired to two different PCs and swap between then at the click of a button, which could be particularly useful for streamers with dual-PC setups.

As we have seen in other Logitech gaming mice recently, the G604 Lightspeed is equipped with a Hero 16K sensor providing precise 1:1 tracking and achieves a 16,000 max DPI. A metal hyper-fast scroll wheel with smooth scrolling or ratcheted scrolling is also included, just as previously seen on the legendary G502. 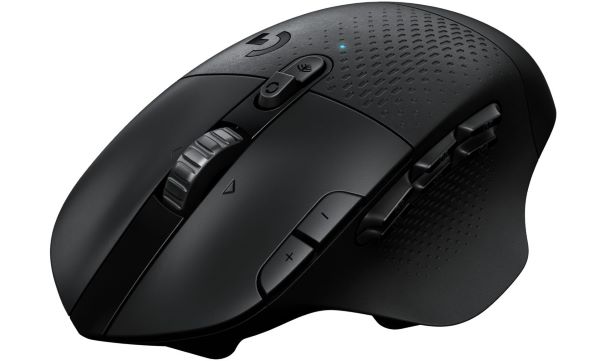 The G604 Lightspeed requires just a single AA battery to provide power, Logitech claims this will be good for up to 240 hours of continuous gaming use in Lightspeed wireless mode, or a massive five and a half months of typical day to day use in Bluetooth mode.

Logitech has moved away from its former black and blue colour scheme with the G604 Lightspeed and has opted for a more subtle all black design, with no hint of RGB lighting. The Logitech G604 Lightspeed is designed for right-handed use and features textured sections along the top and thumb areas for extra grip during those intense gaming battles.

We are expecting the Logitech G604 Lightspeed to be available sometime in Autumn 2019 with a price tag of around £85. As always, we will be sure to keep readers updated when an official date is announced.

KitGuru says: Logitech has stepped up its game with mice in recent years, leading to an impressive line-up with extensive wired and wireless options. Are you ready to throw out an old mouse for an upgrade? If so, would one of Logitech’s offerings be on your wish list this Christmas?