One of the interesting aspects of Kerbal Space Program, is that much of what the developers have added over the past couple of years, especially when it comes to new parts and realism tweaks, was also developed by modders on the side. Sometimes those mods get incorporated and sometimes not, but in this instance Squad is going alone and overhauling the aerodynamics system to make it more realistic – like available mods – but not so much that it isn't “fun.”

Fun is the cornerstone of what Squad wants flying in Kerbal Space Program to be and right now, it doesn't think it really is. “We are not looking to make things more realistic just for the sake of being realistic. If it doesn't make the game more enjoyable overall, then it's not worth adding,” said HarvesteR in a forum blog post.

Realism is important though, as it makes the game easier to understand in the long run, as there's plenty of research into real flying and craft design which can be utilised – much like orbiting mechanics in the game work much like they do in real life. That will make it harder though. No longer will people be able to fly straight up with a large rover strapped to the top like a brick wall.

While Squad hasn't quite figured out how to balance realism and “fun,” thereby not making it impossible to get off the ground unless you're an engineer, it does want to make sure that cargo bays and nose cones offer an advantage over exposed payloads, that streamlined designs fly faster and that wings and control surfaces provide more lift. 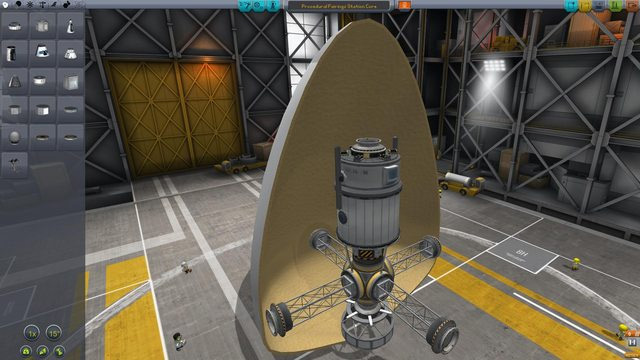 Soon nose cones will do more than just look cool

Where things get difficult though is with drag. Squad likes the fact that people are capable of flying huge and ridiculous ships with a lot of effort and trial and error. With a realistic drag model, anything but a smooth, phallic shape is going to struggle. The new drag system that the developers have worked on should be implemented soon, and “should give us a new drag model in which parts can be obscured by others, and in which pointy objects will be able to fly faster than flat-faced ones.”

It reiterated that this wouldn't be the most realistic aerodynamics and drag model, but that at least there were mods out there would let people crank up the difficulty if they want by making things much more akin to real life.

The reaction from the community was that this update was a little vague, but not many people seem bothered about backwards compatibility, which was a major concern for Squad – it doesn't want to break everyone's ships with a single update.

KitGuru Says: What do you guys feel about the aerodynamics in Kerbal Space Program? Would you like them to be more realistic, or would you rather they were less so and perhaps a bit more “fun,” as Squad said?