Eidos just posted a mysterious screenshot, showing off the new Dawn engine, which is being used to power an upcoming Deus EX project. While the screenshot might not be taken directly from the currently unnamed game itself, it certainly fits the theme very well.

The Dawn engine is a modified version of IO's Glacier 2 engine, which powered Hitman: Absolution. “In the past, we’ve relied on existing engines for our games but in the end, we found that our creative vision was somehow limited. So we decided it was time for us to invest in creating an engine tailored for our needs”, Eidos's Sacha Remtohul wrote in a blog post. 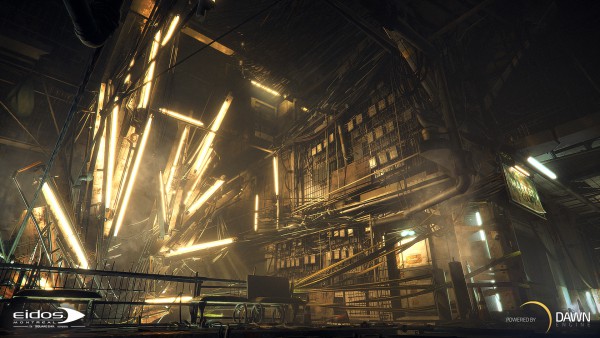 “Keep in mind – despite any hints you may pick up from this image, this screenshot was only taken in order to display the level of detail and artistic fidelity that is possible with the Dawn Engine. As you can imagine, the Dawn Engine will form the cornerstone for all Deus Ex Universe projects at Eidos-Montréal. Some of you have had concerns that ‘Universe' meant ‘MMO'. Rest assured, it does not.”

Eidos is currently working on turning the Deus EX franchise in to a fictional world with lots of back story and lore. There will be core games and spin offs all tying in to each other, the Dawn engine will be the foundation of these future titles.

KitGuru Says: Since Eidos seems to have its game engine down, hopefully we will see a new Deus EX title soon. I was a big fan of Human Revolution so I'm looking forward to a sequel at some point. Are any of you guys fans of the Deus EX series? Are you hoping for a new addition to it some time soon?