While Google manages to corner nearly 65% of the global market with Chrome, the browser has continuously faced issues with RAM usage. In an attempt to address this, boffins have introduced a new baked-in feature to its experimental Chrome Canary browser that cuts down on memory considerably.

Chrome is at no risk of losing its throne as Microsoft’s Internet Explorer takes the second spot with almost 11% of the market and Firefox at 9%, but that hasn’t stopped Google from looking into reducing the amount of resources its browser utilises. Its workaround is far from polished as it’s currently confined to the testing grounds of Chrome Canary, which is free to download but is unlikely to represent the smooth browser experience seen in the live build.

As Ghacks notes, the feature is called “skip best effort tasks” and is designed to overlook low priority actions while Chrome is in use. Of course, these tasks still need to be executed, but they’re put the back of the queue and made to wait until shutdown. Telemetry, writing user data to disk and disk cache cleaning are among the listed low priority tasks. 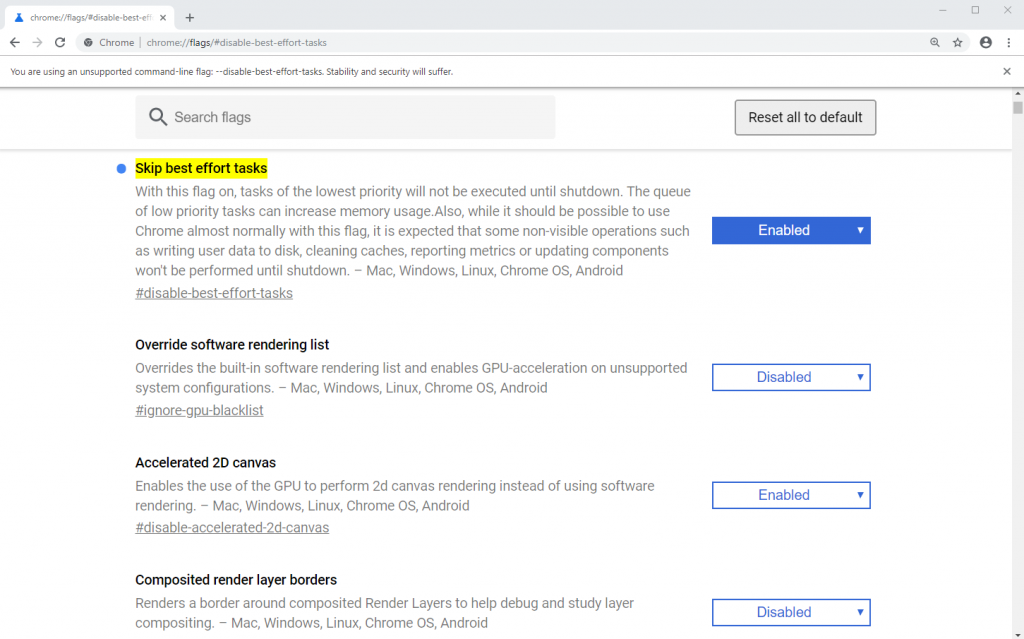 “The queue of low priority tasks can increase memory usage,” states its description in Chrome Canary. “Also, while it should be possible to use Chrome almost normally with this flag, it is expected that some non-visible operations such as writing user data to disk, cleaning caches, reporting metrics or updating components won’t be performed until shutdown.”

The experimental feature seems to be available on Mac, Linux, Chrome OS and Android as well as Microsoft’s Windows platform, but it is not enabled by default. Once the user has ensured they have the most up to date version of Chrome Canary available, they can enable the flag by loading chrome://flags/#disable-best-effort-tasks from the address bar. Simply restart and the feature should be live.

KitGuru Says: Anything that reduces resources in Chrome is welcome, particularly in this line of work where it’s easy to rack up tabs. We will be keeping a close eye on this feature and testing it where we can. Have you been experimenting with Chrome Canary?