With the established dominance of Steam, Valve has attempted to expand into multiple markets across the past few years to varying success. Moving forward, it looks as though the company wants to focus on its gaming efforts as it withdraws its movies on-demand section indefinitely.

Originally hosting documentaries such as Indie Game: The Movie back in 2013, Steam gradually expanded its library to include Hollywood titles such as Mad Max: Fury Road, John Wick and the movie that went on to inspire much of Hideo Kojima’s Metal Gear Solid, Escape From New York. While a handful of gaming-related content such as Deliverance: The Making of Kingdom Come remains, not to be confused with the graphic 1972 title also called Deliverance, Valve has removed its selection in order to refocus. 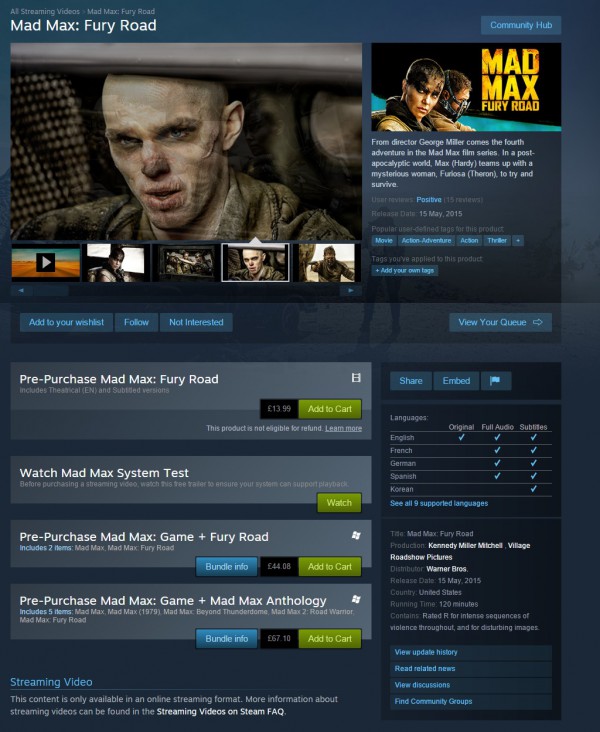 “In reviewing what Steam users actually watch, it became clear we should focus our effort on offering content that is either directly related to gaming or, is accessory content for games or software sold on Steam,” explains the blog post. “As part of this refocus, we have retired the Video section of the Steam Store menu with an expectation that video content is discovered via the associated game or software store page, or through search, user tags, recommendations, etc.”

Users that have already bought content from the Steam Store will be able to access it from their library, while content is slowly stripped from sale over the next few weeks. This is sure to annoy some who were hoping to build a formidable library of movies alongside their video games, but there are digital alternatives such as Amazon, iTunes and more.

KitGuru Says: Many Steam users found themselves asking Valve “why” when movies were originally introduced to the platform, with myself included. As interesting as it is to see the company diversify, it always felt a little out of place among the gaming and social features pushed by the platform. Do you feel as though Valve is making the right decision, backing away from on-demand movies?