The Sony PRS 600 arrives in a small box, modestly designed with the product name on the front and some literature on the back.

Inside there are several multilanguage guides, a USB cable for connecting to your PC and a soft cover for transportation. The device is protected inside a cloth sleeve.

The PRS 600 is a typically designed Sony product, available in black or silver. It is finished in aluminum and is quite light to lift, especially when used after the Apple iPad. Being only 6 inches in length it is noticeably smaller next to the iPad.

The PRS 600 looks substantially different next to the previous Sony eReaders because they decided to kill many of the buttons, resulting in a simple row of 5 across the bottom. As it has a touch sensitive screen this would be an obvious design change. The back of the unit has been kept clean and simple with the name of the device in the middle.

As well as using your finger, Sony have built a stylus into the corner which can be used to activate various on screen displays.

This device is e-Ink based which means the screen is easy on the eyes as it is not backlit. It is crisp and clear and text is easy to read – battery life is rated at 7,500 hours from a full charge. As this screen is touch based however you will notice from the images above that it is slightly more reflective than the majority of E-Readers on the market today.

Along the bottom ridge of the PRS 600 is a mini USB port, a power socket for the optional adapter (it generally charges from a computers USB port), a headphone jack and volume control. Along the top is a power button and SD/Sony Memory Stick Duo slot.

Internally you can store around 350 ebooks, but with the added use of an SD card this can be massively increased. Formatting our 8GB SD card took a few minutes. 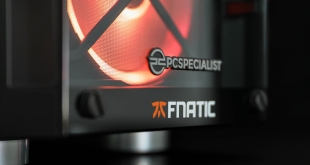 PCSpecialist has teamed up with one of the world’s most recognised esports gaming outfits, Fnatic, to produce the Official Fnatic Gaming PC...