To test the TH40 headset, I used it for a couple of weeks while playing games, listening to music and watching TV shows. It is also worth mentioning headset reviews are highly subjective – what I think sounds terrible, you might think is an example of excellent audio quality, so bear that in mind.

First, let’s take a look at the included software. 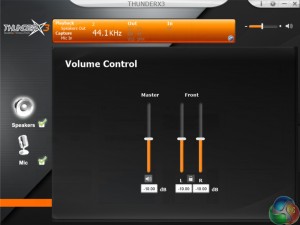 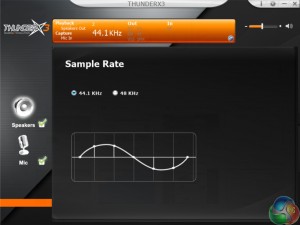 The image above and on the left is the screen which greets you as the software is first opened. It is a pretty basic front page, giving you 3 simple sliders to control the headset’s volume. 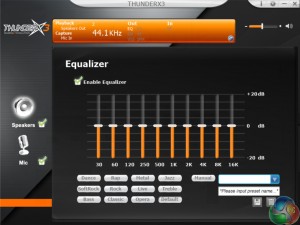 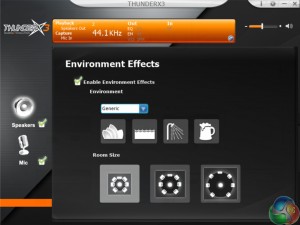 There is also a page which gives you control over the EQ – something I very much appreciate, as it allows you to fine-tune the sound to your liking. Here you can also choose from a pretty big selection of presets as well.

Next is the environmental effects page which is a bit gimmicky. A collection of simple audio effects, it allows users to pretend they are in a large opera hall or in the shower, for example. 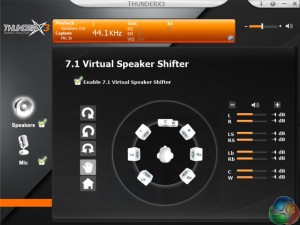 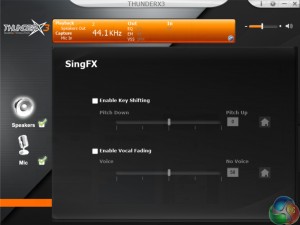 Slightly more important is the Virtual Surround 7.1 page. This gives you control over each of the audio channels – they can be moved around freely, which is a nice bit of control for the user.

Moving on, another gimmicky feature is the SingFX page, which drops or increases the pitch of your audio so you can make music sound like it is from ‘Alvin and the Chipmunks’. 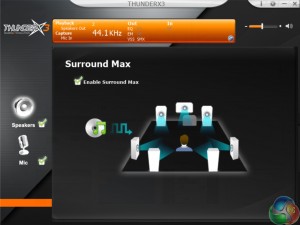 The last page for the headset configuration is the Surround Max option. There is nothing about it in the manual, but based on other manufacturers’ features with a similar name, this replicates the stereo 2.1 channels to the rear 4 audio channels. 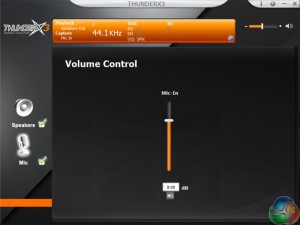 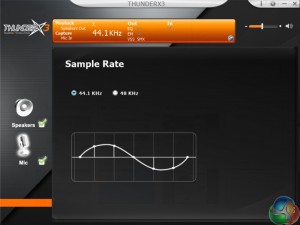 Right clicking the mic thumbnail also brings up some additional controls. First is the volume – very simple, this can also be done via the in-line controller.

There is also an option to select the sample rate for the headset as well. 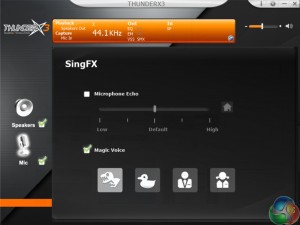 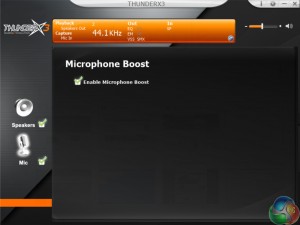 On the penultimate page there are more SingFX options for the mic – which allows you to sound like a ‘monster’ among other things.

Finally, the last page is Microphone Boost – another feature that is not detailed in the manual, so you cannot be exactly sure what it does. Presumably it boosts the mic’s gain level.

All-in-all, the software is usable but not overly inspiring. Given every setting has it own dedicated page, things are kept simple – but the flip-side of that is there are a lot more pages of settings than there really needs to be. Add this to the number of gimmicky features no serious gamer is going to touch, one might be a little disappointed. Still, there is control over the important areas, such as EQ and 7.1 Virtual Surround, so it is not all bad. Things could definitely be more streamlined, though.

Before moving on to the sound quality, let’s take a look at the LEDs which completely illuminate the rear of both earcups. 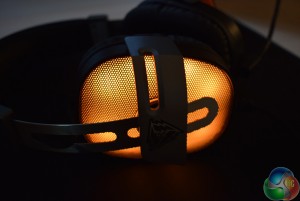 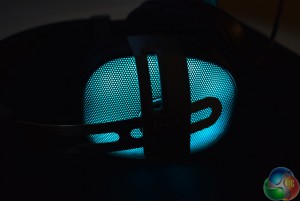 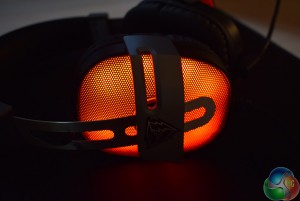 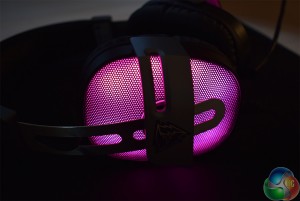 There are a total of 7 colours you can choose from – the TH40 is not 16.8m colour, RGB capable. These 7 colours are: red, yellow, green, orange, aqua, blue, and pink. The strength of the LEDs is certainly impressive – there is great coverage across the whole of the earcup with no weak spots. That being said, I cannot help but feel the whole feature is another gimmick. After all, you won’t be able to see the LEDs while you are gaming, and I would imagine it would actually be a distraction for other people in the room – especially if you are at a LAN, for example. Furthermore, you can only choose between 7 static colours – there is no option to set the LEDs to cycle through the spectrum, nor are there any pulsating/breathing effects.

Moving on to the audio quality, I first tested the TH40 with default, ‘out-of-the-box’ settings – meaning there were no tweaks to the EQ or anything else which is controllable via the software.

In this out-of-the-box state, I found the sound quality to be rather mediocre. The 53mm dynamic drivers which ThunderX3 make a feature of should be very capable on paper, but the mid and high-end dominates completely. What I mean is, the sound coming out of the headset is so sharp that is actually uncomfortable to use for a prolonged period. I found this was especially the case when listening to music – gaming was less troublesome, but even then, explosions made no real ‘impact’ and gunfire sounded rather thin.

Fortunately, there is more to the story. I quickly dived into the software, reducing the mid and high-end frequencies to a level which was much more comfortable for me. This made the sound significantly warmer, and much more pleasing on the ears for all-round use. Now I really felt the impact of the large 53mm drivers, as they became much more prominent in the mix. Before the bass was just completely dominated by the high-end. In this state, gunfights had some real intensity, while the atmospheric soundtrack of Crysis 2 felt haunting and spine-chilling.

With some much-needed EQ tweaks, the TH40 is certainly passable. However, I switched back to the HyperX Cloud Stinger headset which I reviewed previously for a quick comparison and I found the sound quality from that HyperX device is still noticeably better. I cannot help but feel than ThunderX3 have focused too much on the lighting and cosmetic side of things, rather than ensuring that the sound quality is where it should be for a £50 device.

I must also mention the foam earcups. While the actual padding inside is nice and soft, the faux-leather covering feels just a bit cheap. I found it squeaked a fair amount when the headset was on as well, which is very irritating if you are trying to concentrate in the middle of a gunfight.

Lastly, the mic. I do appreciate the flexibility of the boom – it can be bent and twisted in any shape as you desire, a feature I love to see. The quality of the mic itself is also decent, something I verified by both using it extensively in-game, as well as recording myself using the free programme ‘Audacity’. I did notice a hint of distortion if you are starting to shout (as I can find myself doing if I get a kill streak – as rare as that may be) but background noise is minimal.

Previous CES 2017: Seasonic unveils revamped PSU lines
Next Update: Space X is getting back on the (rocket) horse on 14th Jan