GoPro has announced it has started shipping a new device to light up your winter holidays. The GoPro Light Mod is a standalone waterproof light that is rechargeable and compatible with all GoPro mounts.

The new compact and powerful LED light will illuminate the scene or subject with a  wide and even brightness to provide crisp detail with sharp colours and enhanced footage. Alternatively, the Light Mod can be used as a convenient mountable or wearable light that utilises an existing array of GoPro camera mounts which are all compatible with the Light Mod.

GoPro’s Light mod can be used as a powerful headlamp via the GoPro head strap, as a floating light with The Handler or as a belt light on the new GoPro Magnetic Swivel Clip, GoPro has truly thought of it all with the Light Mod. Current users of GoPro devices will already own some of these accessories and new users will find them at affordable prices.

The GoPro Light Mod has four brightness levels to choose from and a strobe mode for signalling and visibility use. The Light Mod comes with a light diffuser that offers additional levels of creative control while reducing shadows and producing a more flattering light. 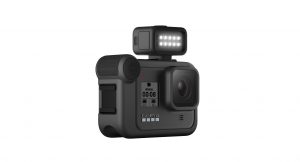 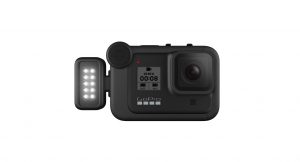 In addition to its standalone features, the GoPro Light Mod is the first of three HERO8 Black modular accessories that are designed to transform GoPro cameras into video production and vlogging powerhouses. Light Mod can be attached to HERO8 via the Media Mod which is a rugged wrap around frame with a built-in directional mic, capable of capturing crystal clear audio with reduced wind and ambient background noise.

Media Mod also includes an external 3.5mm microphone port and HDMI out to connect to a monitor. The GoPro Light Mod will be priced at £49.99 on release and is available in the US now. The device is expected to be rolled out globally in the coming weeks.

KitGuru says: Current users of GoPro cameras should find the Light Mod extremely useful when capturing footage in low light environments. Any of you guys thinking of picking one up for your GoPro?