Oculus Quest is powered by a Snapdragon 835, releases this month

This time last year, we saw Oculus beginning to experiment with all-in-one VR headsets thanks to the Oculus Go. While the Go was intended as an entry-level, low-power VR device, this year we are getting something more ambitious. The Oculus Quest is launching this month, and aims to deliver a ‘console like' experience for VR gaming.

The Oculus Quest is an all-in-one device, so it is not powered by your PC. Instead, you can pop it on your head and start playing at any time without any wires involved. In terms of hardware, you'll be getting a 1440×1600 OLED display and Oculus Insight for movement tracking. This is an inside-out system, so all of the sensors are located on the headset itself and will track your surroundings and your hands.

Powering the games is a Snapdragon 835 processor and 4GB of RAM. The whole thing is powered by batteries, so you'll only really be able to play for two to three hours at a time, potentially less depending on how demanding the game is. 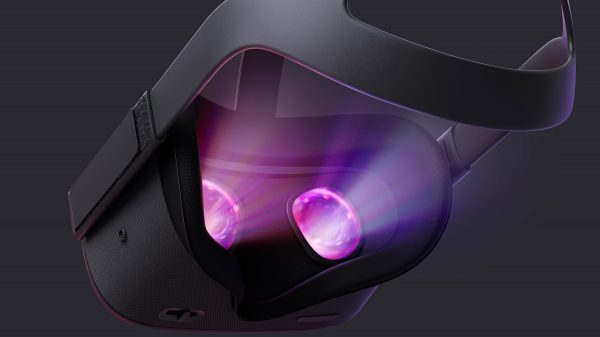 Given that Oculus Quest relies on its own limited hardware, there is a game approval system in place. Right now, the launch library promises to offer 50 games/experiences. This includes hits like Moss, SUPERHOT, Robo Recall, Beat Saber etc. It also includes ‘experiences' like Star Wars: Vader Immortal and Creed Rise to Glory.

This library will grow over time and we'll likely see a few new game announcements at E3 next month. The Oculus Quest will begin shipping on the 21st of May. There are two version, the 64GB one will cost £399, while the 128GB one will cost £499.

KitGuru Says: The Oculus Quest seems interesting, although I would worry about hardware longevity later down the line as more demanding games start to be made available. Are any of you thinking about getting an Oculus Quest this year?