We've been hearing about the Oculus Santa Cruz headset for a couple of years now. The goal with this headset was to produce a truly all-in-one solution for the more demanding games that you can already pick up and play with the Oculus Rift. Now, it looks like the team at Oculus has achieved that. Santa Cruz will launch next year under the name ‘Oculus Quest', with plenty of developer support and some solid launch titles, including Robo Recall, SUPERHOT and even a new Star Wars game.

Oculus Quest is a $399 standalone virtual reality headset, complete with Oculus Touch controllers and room scale tracking capabilities. The idea was to build a truly standalone headset that could power ‘Rift-quality' experiences in order to usher in a new generation of VR. 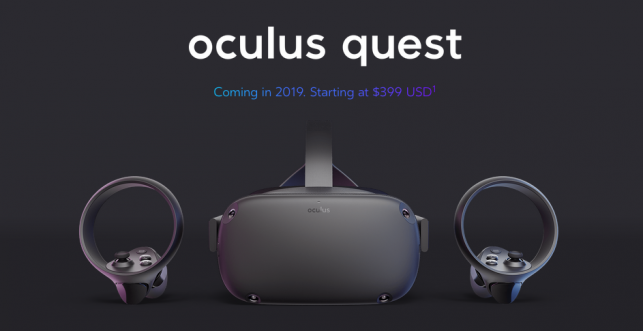 The Oculus Quest uses the same lenses as the Oculus Go, which do a better job of eliminating god rays compared to the lenses on the Rift. In addition to that, resolution has seen an increase to 1600×1440 per eye, which is a marked improvement over the 1080×1200 resolution of the Rift.

This headset will be launching with 50 games, many of which are Rift favourites. This includes The Climb from Crytek, Robo Recall from Epic Games and SUPERHOT from the SUPERHOT Team. There is also a Star Wars game on the way that focusses entirely on Darth Vader.

Tracking works via the ‘inside out' method, utilising four wide-angle cameras on the headset itself that tracks the controllers, your own movements and the play space. This enables room scale gaming without the additional sensor setup.

Under the hood specs are still up in the air but we would guess that it will be powered by a Snapdragon 845 or better. We'll learn more on that a bit later, as Oculus Quest is set to launch in Spring 2019.

KitGuru Says: Oculus Quest sounds very promising, especially for its price point. However, ultimately we'll have to wait to see how developer support and performance works out. The better lenses, higher resolution and lack of inconvenient wires certainly has me interested in upgrading from my Rift. Are any of you thinking about picking up an Oculus Quest next year?

Previous Telltale withdraws The Walking Dead: The Final Season from digital storefronts
Next EGX 2018 – Monitors and more at the UK’s biggest gaming show