We have been receiving new information regarding Samsung's upcoming Galaxy Note 8 almost every week for the last two months. Fortunately, it is almost time for all of the leaks to come to an end as today, Samsung began sending out invites for its next ‘Unpacked' event on the 23rd of August, during which we will see the unveiling of the Galaxy Note 8.

The invitation this year comes with the tagline “do bigger things” and similarly to the Galaxy S8 invitations, it has an outline of the Infinity display. What gives away the fact that this is a Galaxy Note? Well the S-Pen is right there on the invitation, essentially confirming what we already knew, the Galaxy Note 8 will launch in August. 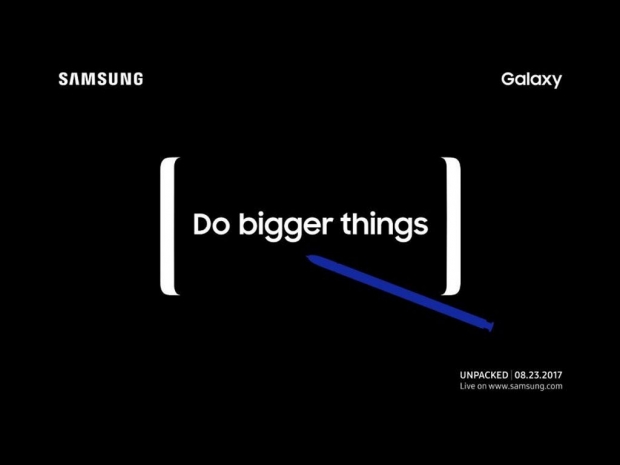 While the Galaxy Note 8 will be launching on the 23rd of August, retail availability will take a bit longer to arrive. We likely won't be able to get our hands on the Note 8 until September. As for price, we were previously told to expect it to be somewhere in the neighbourhood of €999.

As for what to expect spec-wise, we are expecting a 6.2 inch display running at the same resolution as the Galaxy S8+, with a Snapdragon 835 SoC under the hood powering the device. That said, the Snapdragon will only be available in certain countries like the US. Those of us in Europe are likely to receive a version based on Samsung's own Exynos 8895 SoC.

KitGuru Says: I'm glad to see that Samsung is planning the Note 8 launch sooner rather than later. There have been so many leaks over the last month that it will be nice just to finally put it all to rest. Are any of you planning on upgrading your smartphone this year? Are you waiting on the Galaxy Note 8 to arrive?