To test the Razer Kraken 7.1 V2, I used it as my daily driver while playing games, listening to music and watching a variety of videos. During this time, I noted the comfort, practicality and sound-quality of the Kraken – details I will present to you here.

First, let’s take a look at the included software. This being a Razer headset, Razer Synapse is the go-to software utility.

Above you can view a gallery of 8 screenshots taken from the Synapse software. While it is mostly what we have come to expect from Razer’s software – meaning it is very clean, good-looking and easy-to-use – there are a couple of things I want to mention.

First, the headset’s ‘calibration’ setting is brilliant. Here, a continuous sound plays through the headset, and the idea is that users ‘move’ the direction of the sound to align it with the different surround-sound channels. It is quick and easy to do, while it also showcases the effectiveness of the Kraken’s surround-sound capabilities, even if it is software-based surround instead of true surround-sound.

However, one thing I would have liked to see in the software is a simple surround-sound/stereo toggle option. By default, everything plays back in the 7.1 surround mode and the only way to change this is on an app-by-app basis in the ‘mixer’ section of the software. While this is useful as you can individually programme different apps to play in stereo or surround-sound modes, you can only change the settings for an app which is currently open, so you have to manually open every different app/game to enable/disable surround-sound for that app. I think a simple surround-sound/stereo master setting would make life easier for quick changes.

All-in-all, though, Synapse is very successful. The lack of a master surround/stereo option is my only complaint. 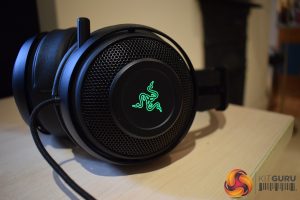 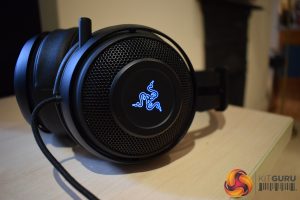 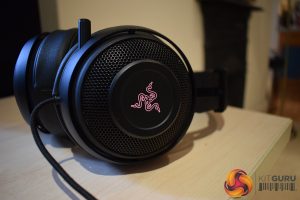 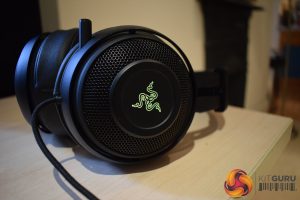 Moving on, the Kraken actually sports some subtle RGB lighting. The Razer logos on each earcup can be configured to display one of 16.7m colours using Synapse, and you can see 4 examples above.

Personally, I think the lighting looks great. It is not over-bearing or gaudy (unlike the ThunderX3 TH40), instead it contrasts very nicely against the matte-black headset frame.

On the whole, the Kraken is quite bass-heavy – which can be good or bad. Listening to some heavy metal and house tracks sounds great thanks to the bass as there is a real thud and drive to the music. The bass can adversely affect speech, however, which makes video-watching or spoken-word tracks slightly disappointing as the mid-range does get overshadowed by the strong bass.

It is not the end of the world, though, as you can actually tweak the EQ using Synapse, so tuning down the bass frequencies is an option if the bass is too much for your liking.

That being said, the bass does give some urgency and intensity to gaming sessions. Using the Kraken for playing some of my favourite FPS games (Star Wars Battlefront, Crysis and Doom) is very rewarding as explosions sound very close and real, while gunfire is full and rich.

While speaking about gaming, we must also mention the 7.1 virtual surround-sound capabilities of the Kraken. I usually find that virtual surround solutions definitely offer a wider soundscape than standard stereo headsets – for example, while playing Battlefront, I could pick out the sound of footsteps and identify the general direction they were coming from. What virtual surround cannot do, though, is give you 100% directional accuracy. This is where a headset like the ASUS ROG Centurion comes into its own (as it features 5 drivers per earcup for proper 7.1 surround).

Before talking about the comfort of the Kraken, let’s mention the mic. Personally, I think this is probably one of the best gaming headset mics I have ever used. Recordings of my voice, made using Audacity, sound extremely clear and crisp, without a hint of distortion. I cannot not hear any background noise in the recordings, either, which is definitely a testament to the active noise-cancelling feature of the mic. The ability to fully stow the mic away when it is not in use is also very handy if you are just listening to music.

Lastly, the comfort and practicality of the Kraken. The headset is very comfortable – the earcups fit over my ears very well, while the cups also sit on your ears quite tightly which aids audio isolation. The padded headband distributes the headset’s weight well and, even during prolonged gaming sessions, I felt no discomfort.

There are just two negative points I need to mention, though. Firstly, if the cable drags or moves across your body, the noise is amplified through the left earcup. This is frustrating when watching videos or listening to quiet music, though it did not distract me while I was gaming.

Secondly, there is no in-line controller, or on-ear controls, to allow you to adjust the volume on-the-fly. This means the only way to change the headset’s volume is using the software, though you can of course change the Windows volume setting independently. Personally, I would have liked a small volume wheel/switch on the left earcup, while a button to change between stereo/surround-sound modes would also be welcome.