AMD says that Kaveri is the most advanced APU ever built, but what does that really mean?
“Kaveri is really three products in one. It’s a Central Processing Unit (CPU), Graphics Processing Unit (GPU) and an audio optimized Digital Signal Processor (DSP). Although each of these processors could be a standalone product considering their performance, the best part is that these are not three separate products – this is all one Processor. Kaveri really redefines what the new modern processor is”.

Got it. Sasa seems very excited about the launch, so we wanted to know why?
“First, we know that we now live in the Heterogeneous Era. But the fact that 9 out of 10 processors ship with CPU and GPU on the same piece of silicon does not mean that our job is done. It means that we have reached the tipping point, but HSA is the architecture that sets the rules for processor design while allowing companies to differentiate with their IP. HSA is about processor “equality” if you will. hUMA and hQ unleash the GPU from boredom, sitting idle when not playing games and put it to good use, working shoulder to shoulder with CPU. GPU was always capable of doing the work, it was just not given the opportunity to prove itself. HSA gives GPU that opportunity by enabling developers to easily utilize its full potential (that is about 6X bigger than CPUs in terms of GFLOPs on Kaveri)”.

.
Going back to what Sasa said at the start about the extreme efficiency of HSA, would he care to expand?
“HSA delivers unprecedented efficiency out of the CPU and GPU working together in harmony, Mantle removes the overhead of the Direct X API and empowers the GPU to give its best, and TrueAudio that utilize more voices and channels at once without tying down the CPU. All of this is delivered at TDPs that were previously reserved for a Processor with only one processing element inside”.

Throughout the conversation, Sasa kept referring to Kaveri as though it was something new. Given that APUs have been in the market for 3 years, what’s so fresh?
“Kaveri’s ‘revolutionary’ architecture is based on finally delivering the holy trinity of processor design – Image Quality, Performance and Power Consumption – all at the same time. These things are contradictory by nature as if you increase the image quality, the performance goes down. If you increase the performance, the battery life goes down (or the product size increases). So resolving this was no trivial task. With Kaveri we quadrupled the image quality of the video (with support for 4k resolutions), enabled gaming performance of 1080p @ 30 fps and achieved incredible power efficiency (45W TDP part that delivers over 80% performance of the part that has double the TDP). 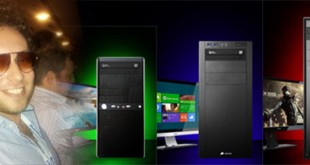 One of the most unusual names in the UK gaming market, Dino PC has now …