MSI GE63VR 7RE – Screen
As mentioned in the introduction, one of the things that makes MSI’s new Raider series of 15.6in gaming laptops so special is the option of a 120Hz Full HD display. Unfortunately, the panel type that offers this option here is a TN affair, which usually means poor viewing angles, average-at-best contrast and so-so colour accuracy compared to VA or IPS. While there is a GE63VR 7RE version with a UHD-resolution IPS panel that offers AdobeRGB colour coverage, this comes with a 60Hz refresh and is not available in most regions. So based on specs it’s a choice between quality and speed. Yet most gamers will probably be glad MSI went for the latter and, in this Raider’s case, there might be more of the former than you would expect.

The notable absentee on both options is any kind of adaptive sync, like Nvidia’s G-Sync or AMD’s FreeSync, which synchronises your graphics card’s output to the display’s refresh. It’s a slightly puzzling omission given that the GE63VR 7RE’s GTX 1060 could probably use the help in demanding 3D titles, but adding G-Sync would likely have added to the overall cost (though mobile G-Sync doesn’t require the same proprietary hardware module as on monitors, we imagine Nvidia still charges licensing fees).

When it comes to assessing and measuring the performance of any display – and especially LCD-backlit types – please do keep in mind that the results should only be used as a guideline: not only is every panel different to some extent, but a number of other factors can affect measurements too. 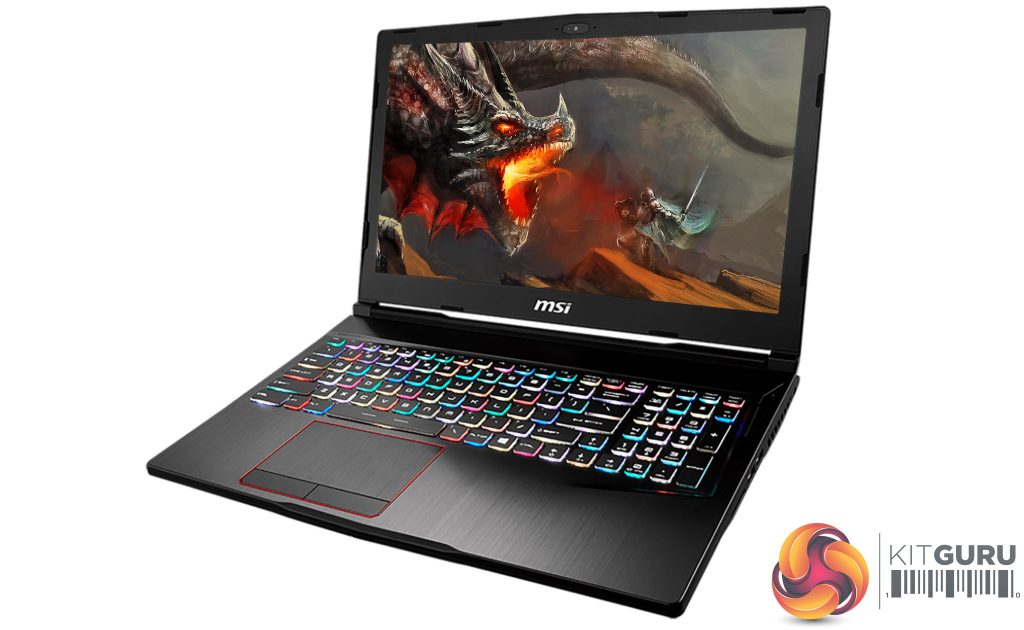 Subjectively, the 120Hz Innolux (N156HHE-GA1) matt-finish TN display made a surprisingly impressive… impression. Horizontal viewing angles were on the good side for a TN panel, meaning you can shift slightly out of the central ‘sweet spot’ without too much damage to perceived colours or contrast. Vertical angles are always TN’s biggest challenge and that’s no less the case here, but again it’s among the better TN examples we’ve seen, and the washed-out effect we’ve suffered on far too many panels of this type is noticeable only by its absence.

Backlight uniformity too was visually very good: both at its impressively low 6.5cd/m2 (a measure of brightness also known as nits) minimum and highest 310cd/m2 luminance levels, there was no variation strong enough to cause visible ‘patches’ on a dark background, and no backlight bleed whatsoever. For those intending to use this laptop for photo or video editing though, do keep in mind that our measurements showed a relatively minor deviation of up to 6.8 percent vertically across the right third of the screen.

And while we’re on the topic of luminance, we would like to commend MSI on the option to adjust the screen’s brightness low enough to ensure comfortable use in dark environments, and conversely bright enough to still be legible on a sunny day outside.

The good news continues with colour coverage, which MSI rightly crows about. Not only did we measure 99.8 percent of sRGB, which within margin of error is a perfect score, but also a whopping 87.7 percent AdobeRGB and frankly stunning 92 percent DCI P3. In fact, this is even above the standards required for HDR colour coverage, and certainly beats the stuffing out of most laptop displays, let alone TN ones.

Colour accuracy, meanwhile, is also pretty impressive. At dE76 we measured an average of 0.14 and maximum of 2.11, while the more recent and demanding dE2000 gave a still excellent 3.0 average and 5.3 maximum. Gamma was only a bit off from the 2.2 ideal at 2.1, while likewise colour temperature of 6382K is close enough to the 6500K ‘daylight’ standard. So overall you can be pretty confident you’re seeing games close to ‘as the director intended’, and even for some non-critical colour and graphics work the MSI GE63VR Raider 7RE will serve you well.

As some of our readers likely already know, contrast is one of the most important visual factors when it comes to entertainment, and even here this display does a great job. At our preferred luminance level of 120cd/m2, we measured a decent black level of 0.11, which gave a nice contrast of just over 1040:1.  For a TN-type panel this is pretty much as good as it gets, with only VA guaranteeing a better figure.

Last but not least we had a look at the panel’s pixel responsiveness and high 120Hz refresh. Unlike on a monitor, where pixel overdrive is nearly always adjustable at a hardware level, most laptops don’t offer this kind of control; so we’re pleased to report that we noticed absolutely no overdrive artefacts, trails or smearing.

The panel’s native high refresh also meant that everything looked really smooth on the GE63VR 7RE – as long as the display was being fed at that refresh rate, of course. At this stage it’s worth mentioning that the Nvidia GTX 1060 card in this particular Raider model will likely struggle to deliver many recent games at a consistent 120Hz refresh rate, but we’ll get to that in the Gaming section. For now, suffice to say that a refresh faster than the usual 60Hz makes everything (not just games) look and feel pretty sleek, so it’s definitely worth having. 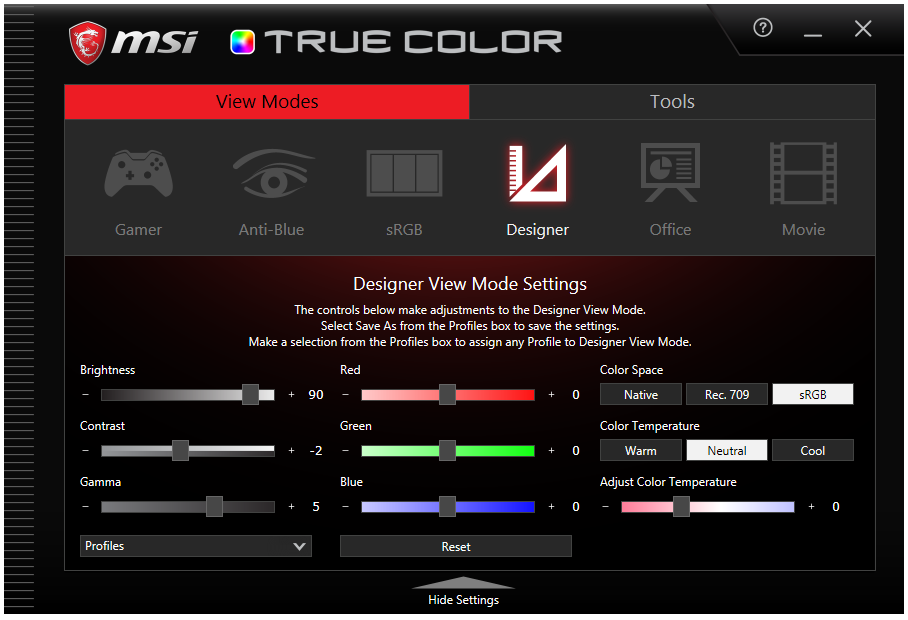 MSI GE63VR 7RE – True Color
As mentioned in the software section, MSI’s Dragon Center gives you a number of presets for the display – but these are also available from the MSI True Color app, which is far easier to access. Not only can you get to it in the traditional ways, but it’s been cleverly added to the menu that pops up when you right-click on the desktop too.

True Color contains two tabs: View Modes, and Tools. View Modes is MSI’s name for the display presets, which as mentioned include the default sRGB, Gamer, Anti_Blue (low blue light), Designer, Office and Movie. However, unlike the selections on many laptops these are all customisable, allowing you to adjust factors as diverse as colour temperature, RGB values, brightness, gamma, and more. 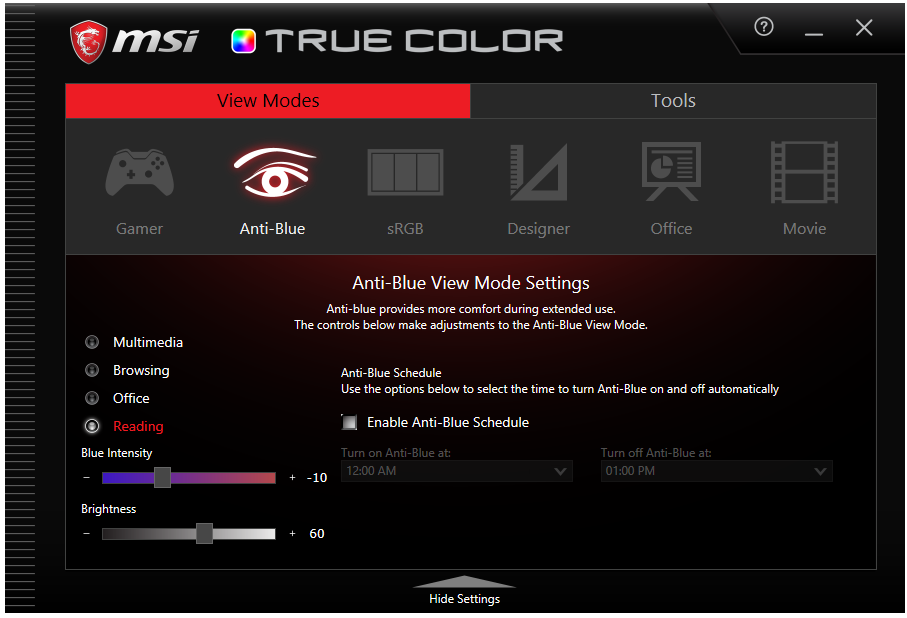 The Gamer ‘view mode’ also lets you save, import and export profiles with any combination of these settings. Anti_Blue, meanwhile, lets you set start and end times in addition to intensity and various sub-presets. MSI has done a really good job of making these presets genuinely useful compared to many other implementations we’ve come across.

The equally useful Tools tab has several sub-sections, two of which we’ll take a quick look at. First of all, App Sync can set modes or profiles on a per-application basis. The second is called Calibrate, which does exactly what it says on the tin. For calibration, True Color requires that you get your hands on either the Xrite i1 Display Pro or one of SpectraCal’s C3 or C6 colorimeters, as they all share the same basic hardware. If you’re lucky enough to own, beg, borrow or steal (please note, KitGuru does not condone theft) one of these, MSI’s software will calibrate every preset automatically, with no user input whatsoever required. 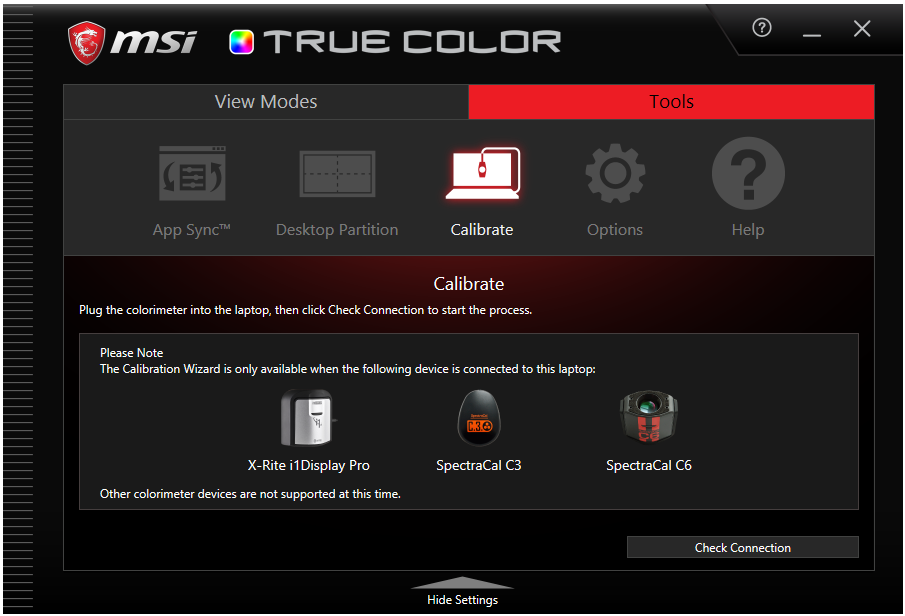 Of course we had to check to see how much panel performance improved post-calibration, and unfortunately the answer is not much. In fact, in some cases it made things worse. Colour temperature went from 6382K to 6455K, which is closer to the 6500K ideal. However, gamma didn’t fare so well, now measuring 2.05 rather than its previous 2.1, which was already off from the 2.2 ideal. And while we’re hardly surprised sRGB coverage stayed the same, we were disappointed to discover that colour accuracy had not changed either, with the exact same figures measured as before. So mixed results here then, although your mileage may vary. 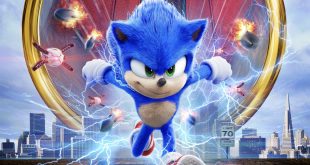 The Sonic the Hedgehog film has had a tumultuous development. From the near universal dislike …