Update 23/10/17: Since the original story, Cryorig has responded to our query, explaining that the picture is actually fan made, yet the posting was the fault of the company. You can read the full response here.

Cryorig is a relatively new company on the scene, with its H7 Quad Lumi RGB Air Cooler having impressed us just a couple of months ago. It seems that the company is still finding its feet on social media, however, after not so subtly taking shots at Cooler Master over on its official Twitter page.

Cryorig sent out a standard tweet in promotion of its new AM4 compatible coolers and its upgrade kit for its previous editions, showcasing its own products. The picture itself features a new AMD Ryzen processor boxed on top of Cryorig’s H7 cooler, but it doesn’t take a keen eye to notice what is in the background. 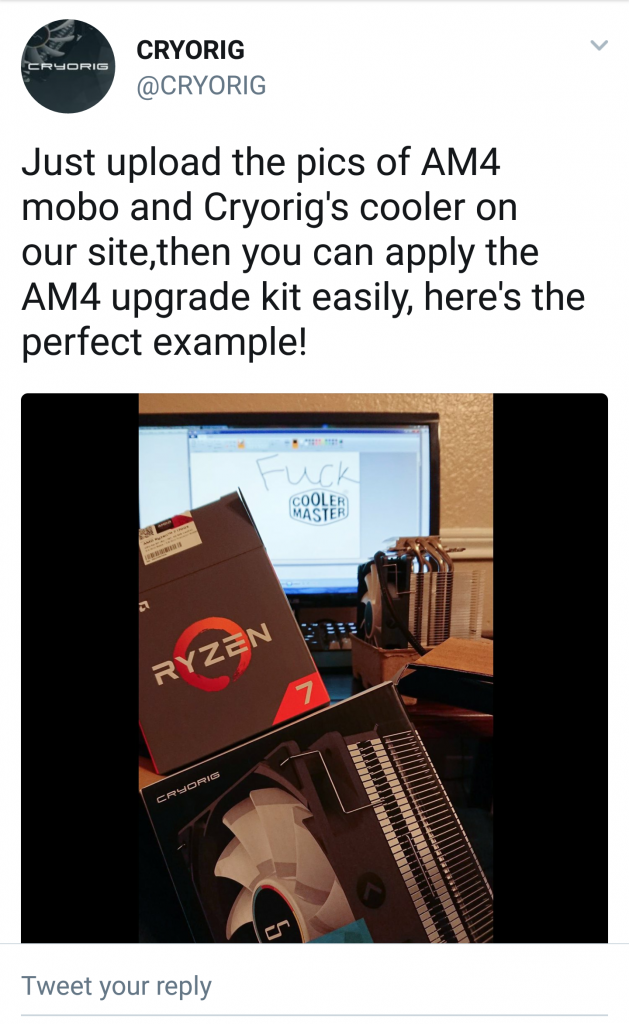 With a crude use of the recently saved Microsoft Paint, profanity can be seen lingering above the logo of one of Cryorig’s top competitor’s, Cooler Master. It’s slightly out of focus but intentionally legible its audience.

There have been some interesting interactions between competing companies in the past, usually on the more playful sides of things, but Cryorig’s attempt is certainly a questionable way to go about it.

It might be a pebble in the ocean as it stands, with Cryorig’s Twitter sitting just above 7K in comparison to Cooler Master’s 278K. Cryorig has since responded to the matter, apologising to Cooler Master to the mistake.

KitGuru Says: Blunder or perfectly harmless, one thing that needs to be remembered is that these accounts are run by real people who can misjudge and make mistakes from time to time. Do you think Cryorig’s tweet was harmless or do you think there’s an unprofessional aura around it?

Previous Nintendo Switch tops the U.S. sales charts once again
Next Samsung unveil Bixby 2.0, meant for all kinds of devices