The Roomba is one of the most recognisable robot helpers out there, having been available in various guises for years and has helped many thousands of people live in automatically vacuumed homes. They do also have one glaring problem though: if they run over animal faeces, they can spread it all over the house.

iRobot, the maker of the Roomba, has received a lot of complaints for this problem over the years and The Guardian has put together a number of examples. A cat misses a its litter tray, the dog leaves a sneaky one behind the sofa while you’re out and since it cannot spot such an obstacle, the Roomba rolls right over it, dragging it into every crevice of your home.

Although the Roomba is able to map out its surroundings and devise efficient routes to vacuum in, it isn’t very good at spotting obstacles that don’t impede its motion. So something soft like animal leavings, which get stuck in the wheels and brushes, it just rolls on over. 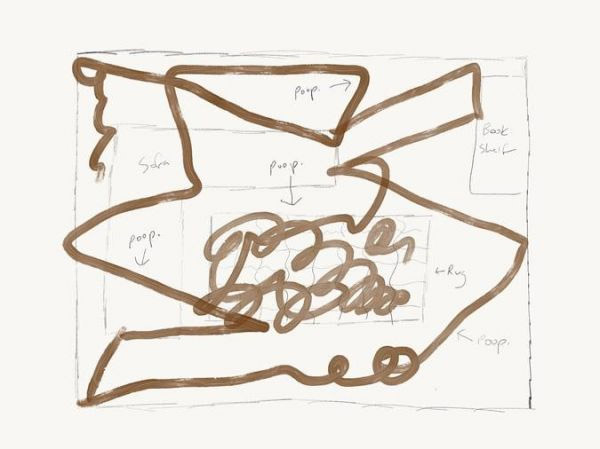 The diagram of poo spreading by a single Roomba. Source: Jesse Newton/Facebook

Although funny and/or disgusting depending on your proximity to such a problem, it’s these sort of scenarios, where something common, but not ordinary happens, that presents autonomous technology with difficulties. It’s not good at dealing with tasks it wasn’t designed for.

Dealing with faeces may be something that a lot of robots of the future may struggle with. How do they detect it? How do they deal with it?

iRobot has said it is aware of this specific problem its hardware faces and says that it is looking into some form of image processing to detect and avoid such messes in the future.

KitGuru Says: I mean, just crate your dog when you go out? Maybe I’m crazy, but that seems like a very easy way to solve this problem. That and properly house training your animals. One woman said this happened to her several times a year. That just sounds like poor problem solving, rather than an issue with the hardware.

Previous Hackers claim to have cracked NSA-tied white hat team
Next Taken a cool screenshot? We’ll give you a free game for it