It turns out that there is a way to get an Android Wear device to play nicely with iOS, as one developer managed to pair the popular Moto 360 with an iPhone, allowing the smart watch to receive notifications from iOS.

Official support is unlikely though, after all, Apple will want iOS users to be trapped inside of its eco-system and stuck with the Apple Watch while Google will want Android Wear users to also own an Android smartphone. Developer, Mohammad Abu-Garbeyyeh did manage to find a work around though by using Apple's official APIs to send notifications over Bluetooth LE. 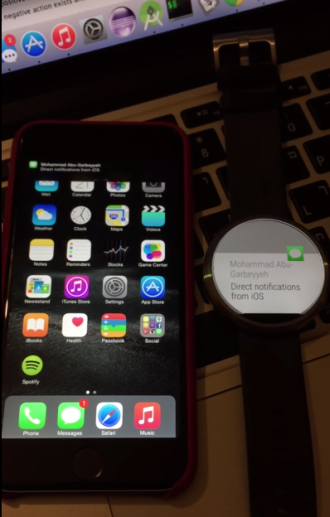 Since the work around uses Apple's own official API, jailbreaking is not required, allowing notifications to be sent to the Moto 360.

While this is impressive, getting other things to work, like apps, Google Now or the syncing of health data would require a lot more work and even then, it might not actually be possible to implement full compatibility.

KitGuru Says: If I were to buy a smart watch, the Moto 360 would be the one I went for. Unfortunately, being an iPhone user really hinders my options. While this developer wasn't able to make Android Wear fully compatible with iOS, it is a nice step in the right direction. Do you guys think smart watches should be cross-platform compatible? Do you prefer to be tied in to one product eco-system?

Previous PlayStation+ subscribers may never get the free version of DriveClub
Next Blizzard: Diablo 3 micro-transactions won’t come to EU or US