Google recently announced its intention to down rank torrent sites on its search pages. These new anti-piracy measurements have since kicked in and as a result, some popular torrent sites have seen a large drop in traffic. However, while large sites are seeing a downturn in traffic, some smaller torrent sites may benefit from it as the search results now show less popular sites.

In recent years, the entertainment industries have been aggressively trying to talk Google in to taking more responsibility when it comes to fighting piracy. The search engine giant has finally yielded to requests and now actively demotes pirate sites in searches, rather than just down ranking sites based on DMCA complaints- which started back in 2012.

Above you’ll find a graph provided by TorrentFreak, showing off the recent drop in traffic. The drop is illustrated by a day to day traffic comparison before and after the changes were made. Down ranking affects all sites with a high percentage of DMCA takedown requests, when Google users search for a popular move with terms like ‘download’, ‘watch’ or ‘torrent’, piracy sites will be demoted.

The new measures seem to be more effective than previous changes and will affect all major pirate sites. Another graph shows site visibility changes in the UK and US following the down ranking changes: 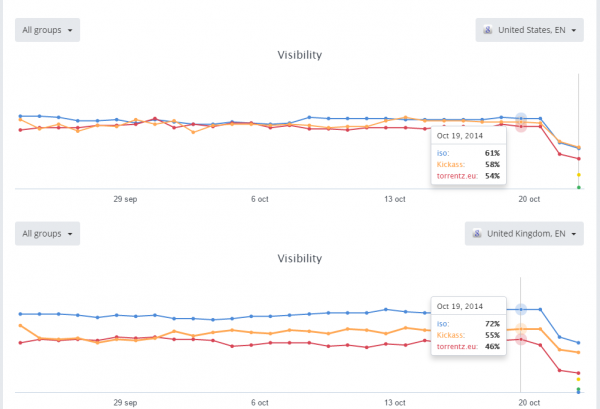 Obviously, impact will vary from site to site. Speaking with TorrentFreak, a member of the Pirate Bay team said: “Google is putting our links lower is in a way a good thing for us. We’ll get more direct traffic when people don’t get the expected search result when using Google, since they will go directly to TPB.”

Searches for torrents will now show less popular sites rather than the big names everyone is used to, like Kickass  or The Pirate Bay.

KitGuru Says: While Google’s new search down ranking measurements won’t put a stop to piracy, it will diminish visibility and its clearly lowering traffic. What do you guys think of this?