Following a slew of rumours published on the web earlier this morning, Intel has confirmed its plans to acquire Mobileye, a company that specialises in self-driving cars and has teamed up with the likes of Tesla and BMW in the past. The Israeli firm will be bought in a deal currently valued at $15.3 billion and will push Intel's self-driving car efforts forward quite a bit.

Intel and Mobileye have teamed up in the past, putting together around 40 autonomous vehicles for testing on public roads later this year in both Europe and the US. RIght now, Intel is estimating that the vehicle systems, data and service market will hit around $70 billion by 2030, so it is hopping on the train early with this acquisition. 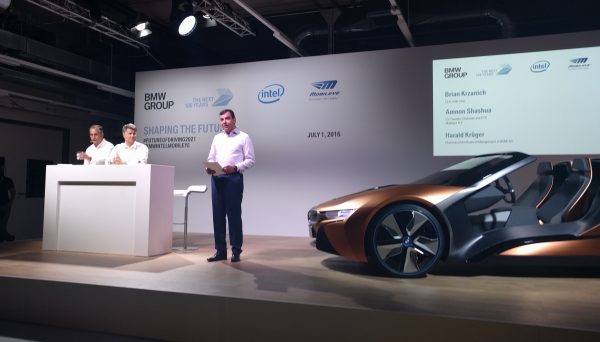 With this acquisition, Intel and Mobileye will form a new organization under Intel's Automated Driving Group, with a HQ based in Israel. All current contracts currently under Mobileye for automotive OEMs will be retained under this new company.

Speaking about the deal, Intel's CEO, Brian Krzanich said that the acquisition of Mobileye will “bring together the assets of Intel's Xeon processors, FPGAs, 3D XPoint memory and 5G modems with the world leader in automotive computer vision”. He also described the move as merging the “intelligent eyes of the autonomous car with the intelligent brain that actually drives the car”.

KitGuru Says: With competing chip makers like Qualcomm and Nvidia also competing in the autonomous vehicle space, it makes sense for Intel to start applying some pressure with technology of its own.