Update: Just a few short days after our original report, Microsoft has officially launched a new preview version of Windows 10, containing a version of the Edge browser that officially supports extensions. Once public testing has wrapped up, everyone with Windows 10 will get access to the updated version of the browser. There will be just three extensions to start off with and right now, it isn’t known if Chrome extensions will also be compatible with Edge but we should know more soon.

Extensions for the Edge browser will be downloaded from the Windows Store directly. Unlike Internet Explorer’s native add-ons, Edge has designed its extensions platform to be easier for developers to work with and port from other browsers.

Original Story: Back before the launch of Windows 10, Microsoft began talking about its new Edge browser and there has been plenty of talk about extension support but unfortunately, that got pushed back to 2016. Now, Microsoft is close to finally implementing extensions for the Edge browser, at first for Windows Insiders with a public release set for later this year.

As MSPowerUser points out, Microsoft has recently updated its website for Edge extensions, detailing the first three extensions that will be released for Edge, including a translation tool, a Reddit extension and another one for mouse gestures. 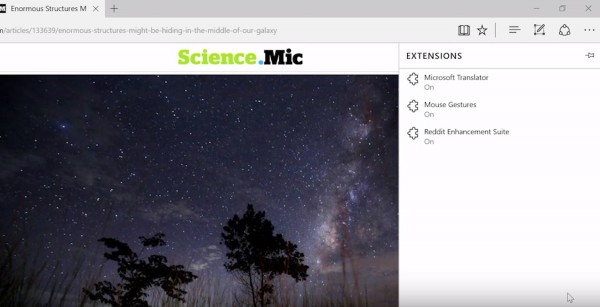 We don’t know exactly when Microsoft intends to debut this feature either but Microsoft is currently testing builds internally and Insiders will likely get access soon. Microsoft has plans to implement extensions in the Windows Store too once everything is fully tested.

KitGuru Says: We have been hearing about extension support for Microsoft’s Edge browser for quite a while now but it looks like the company is finally gearing up to push testing to Windows Insider users, which will then lead to a proper public release. Do any of you use the Edge browser at all or have you stuck to something else?