Don’t forget the UK rushed through the DRIP snooping law

Do you know what the government hopes the most about its recently rushed through DRIP legislation? That you’ll forget about it. For those that don’t know, DRIP, or the Data Retention and Investigatory Powers law, is a bill that was pushed through last week that forces ISPs and in-fact any company dealing with data on UK citizens, to store your activities and information for up to a year. This was pushed through in just over a week, with almost zero debate or scrutiny, despite the fact that back in April, the European Court of Justice ruled the practice as a breach of human rights.

The reasoning behind the UK’s response to this law (over three months late mind you) is that without hoovering up the conversations, internet histories and content of text messages of every single British citizen, they wouldn’t be able to track terrorists and paedophiles. While those two buzzwords should throw up a red flag whenever a politician pitches them around like a moral smokescreen, the fact that the entire world is up in arms over the data retention practices of the US and yet the government here wants to increase its powers and rope in private companies to do it, should be even more cause for concern.

Not only does that mean that the public’s views on snooping are completely unheeded, but it shows that politicians themselves don’t understand what’s being pushed through. In many cases like this, where a law seems to affect the public far more than the politicians themselves, if they truly thought about its implications, they would obviously have voiced more concern. In recent years, the expenditure scandals through second homes and other expenses, has ended the career of more than a couple of MPs and tarnished many others. Do they not realise that it’s this sort of snooping that can bring these scandals to light? 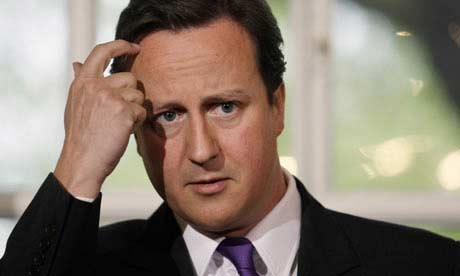 According to Mr Cameron, we’re all suspects

While I doubt you’ll find many people opposed to the idea of catching out a politician gaming the system, the fact that those same politicians who no doubt have a few skeletons in their closets didn’t attempt to halt the DRIP laws going through should tell us just how little they understand it.

The only ray of hope in the whole DRIP law situation is that it has a clause that brings it to an end in 2016, with the idea to re-evaluate its usefulness and (presumably) legality. And that’s why we mustn’t forget it. David Cameron has pledged to increase surveillance should be voted in again after the next general election, so it seems unlikely he’d rescind more snooping powers in 2016. He and his supporters like Theresa May, who trumpeted the loudest when this legislation was being rushed through, are no doubt imagining that the world will have moved on by 2016 and we’ll have forgotten that this law is in place. We’ll be used to having all of our information seized and stored, despite it breaching fundamental rights laid down by the EU.

That’s why we mustn’t forget, so that when the times comes we can do something about it. Don’t forget it in the mean time either, as you can get in touch with your local representative (here) to complain that they didn’t throw up a stop sign when they had the chance. If you want to go all out, you can join the Open Rights Group (here) which is planning to sue the government over this law’s implementation.

KitGuru Says: Elsewhere in the world, snooping laws are used for more than tracking down terrorists. They’re used for stopping protests before they begin and preventing government descent. That’s the slippery slope we’re on. As badass as a V for Vendetta finale would be, nobody wants the build up police state. It’ll happen if we let it.

And to those that say “I have nothing to hide,” the problem, with that argument, is that you don’t choose what you need to hide. Today it might be terrorist affiliations, but tomorrow it might be voting for the opposition party, or being friends with a muslim. Remember that just because it doesn’t affect you yet, it may do in the long run. Stand by others now and they’ll stand by you when it’s needed.