Kim Dotcom is a larger than life personality, known for his extravagant displays of wealth as much as he is his entrepreneurial ventures and political aspirations. Still, while you can find plenty of pictures from the past decade showing him on private jets, with heavily modified cars and lounging in hottubs on yachts, the founder of the defunct MegaUpload file locker has recently asked courts to release some of his frozen funds, describing his current financial situation as “destitute.”

This might seem hard to believe if you were to look where Dotcom is living: a giant mansion in New Zealand, featuring acres of land, helicopter access and a small lake,  but the enormous house, despite costing the man over a million NZ dollars a year in rent, was pre-paid up until April. Now though with little liquid funds to speak of, Dotcom is struggling to find the money to pay for ‘basic' services and food, which is why he's requesting the court unfreeze several million dollars from his assets so that he can continue to live life as usual. 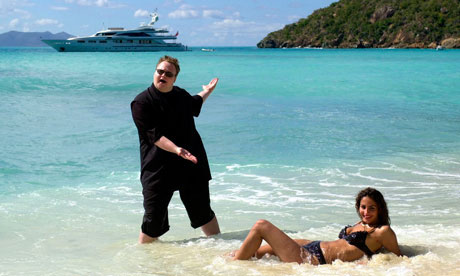 While some have suggested he move – which he will have to do if the funds are not granted – Dotcom stated that his children had grown up at the home and having invested several million in improving it, he didn't want to leave it.

According to Radio New Zealand, he requested some $200,000 NZ (£97,000) a month for living expenses and three to four million NZ dollars for outstanding legal fees. Dotcom still owes his legal defence team that quit last year several million in unpaid bills too.

While the court has yet to issue a decision on this matter, the government's Crown lawyer, David Boldt has pressed the court to deny his request, suggesting instead that he contact his ex-wife Mona Dotcom, for access to the family trust fund, which she is the sole trustee of. Previously she had allowed him to dip into the pot for projects like funding his Good Times album and for making donations to the Internet Party political campaign.

KitGuru Says: Although I imagine the delaying of Dotcom's extradition trial was a tactic used by his defence to distance the crime in the minds of those that will make the decision on whether to send him to the US or not, that seems to be backfiring now. It seems bizarre he can have such problems though, considering the monumental success of sites like Mega which were launched after his arrest.