Home / Channel / The Facebook, Oculus deal makes sense for everyone

I know guys. I know. I’m mad too. I’m sad, disappointed, even betrayed, but these are all things I’m feeling and I bet you are too. We’re having an emotional reaction to two companies worth multiple billions of dollars doing a business deal and though I can’t help but wish it hadn’t happened, I know that if I look at it logically, it makes sense for everyone.

Firstly let’s look at Facebook itself. While still dominating the social networking scene Facebook has peaked and is slowly on the decline. It may be still seeing increased user numbers around the world as it enters new territories, but in specific age groups, teens and 20-30s, it’s definitely on the downward slope. It’s not the cool, hot property it once was, so the kids are moving on to new methods of communicating. Facebook has to diversify and move with the times, hence Whatsapp, hence Oculus. 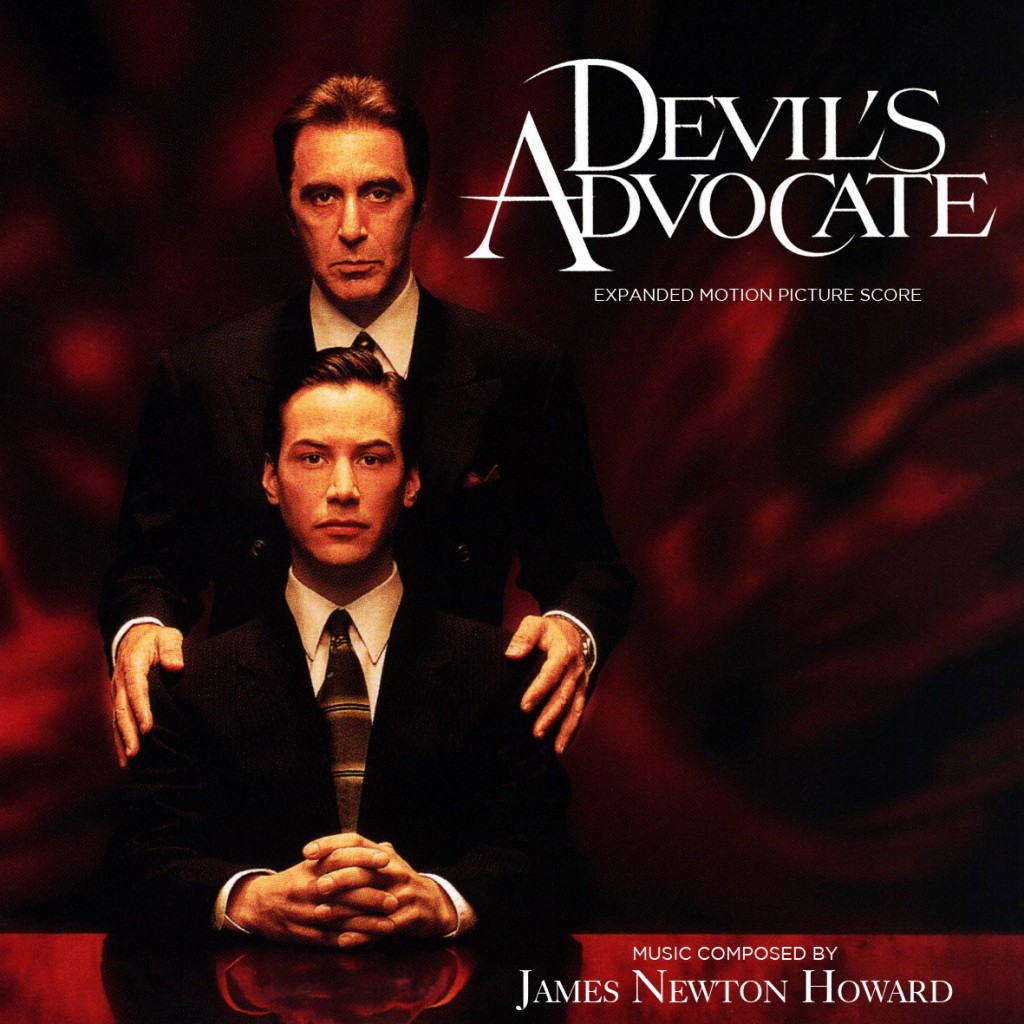 With the Rift, Facebook will be able to champion digital, virtual face to face meetings, hang outs, multiplayer movie watching, virtual music gig experiences – the potential to expand into all these areas is huge, all through a centralised Facebook or Oculus hub, which it can sell adverts on.

All of this was coming any way, but now it’s going to have the Facebook name associated with it. I know that seems distasteful, especially considering Zuckerberg’s stances on privacy and personal ownership in the past, but this isn’t Zynga with OMGPop, this is Facebook, a company that while overvalued in any number of ways, is making WhatsApp work and it’s grown Instagram exponentially.

It also can’t afford to screw up with Oculus, as there’s competition out there now. Sony isn’t too far behind and Microsoft is dipping its toes in the water. Oculus has a head start, but not enough that it can drop the ball on the consumer launch and still maintain that lead.

Let’s talk about Oculus’ position though, as really, it didn’t have to take the deal did it? Well, no, but then again, how many of you would have turned it down? Seriously, think about it for a second. If you started up a business and two years later someone offered you two billion dollars for it, are you going to turn that deal down? Even if it comes from Facebook? While I’m sure there’s a few who legitimately would, the majority of you saying no, are liars. 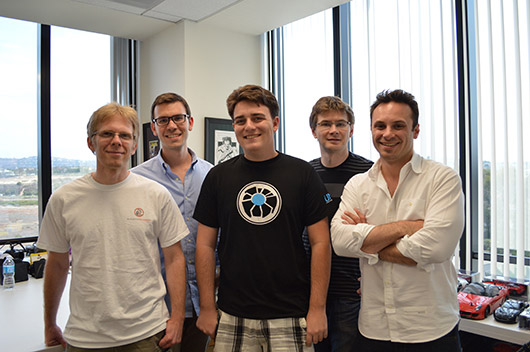 Look at those guys. Running a successful, fun, innovative business. And they’re happy. What assholes.

Even taking the personal money out of the equation though, Oculus is still a very niche product (for now) and even with the impressive number of devkit sales, we’re still years off this becoming a mainstream product. Not only can Facebook finances help make that a reality, but it can also promote it like nothing else. Hell, a massive portion of KitGuru’s traffic comes from Facebook, can you imagine the amount it could funnel Oculus’ way if it so chooses?

It can help champion the more social aspect of the Rift too. It’s great for some games, but if you’ve used it extensively, you’ll know that “experiences,” in it tend to be more memorable. That’s partially because very few real Rift games have been made yet and we don’t have the full capabilities of a consumer version, but it should also tell you that as much as we love the Rift as a gaming device, it’s so much more than that. 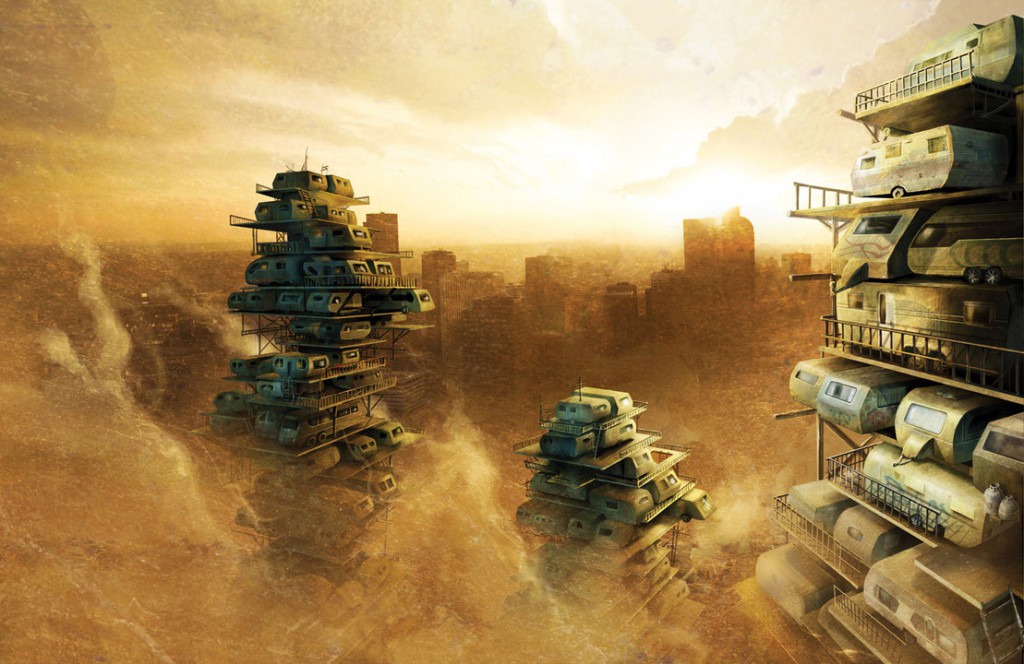 All we need now are trailer park skyscraper “stacks” and we’re good to go. Source: Sepiawolf

We’ve seen the potential for vision correcting programs, help with phantom limb pain, communal movie watching experiences, the ability to visit virtual art galleries – there’s a myriad of weird and wonderful things you can and could be able to do with the Rift and it’s these are the sorts of things Facebook is going to push. AND, it’s these sorts of things that will take the Rift mainstream, which is where it needs to be if you ever want to see it get the install base it needs for big developers and publishers to give it the time of day.

But what about Kickstarter backers? You helped fund the very company that has just been bought out. As Notch said, he didn’t drop 10 grand on the Kickstarter to see if sold off to a giant corporation two years later. Neither did any of the original backers. If we cut to the quick though, you know what you and he did pay for? Your rewards. Notch paid that extra money to go to the Oculus developers studio (which he only just decided to do), an early Devkit, Doom 3 BFG and a few little extras. If you pledged enough for the original Rift, you got one. That’s what Kickstarter is, a potentially volatile pre-order system, that is designed to help companies and ideas that you like succeed.

In Oculus’ case, it worked exactly as intended. 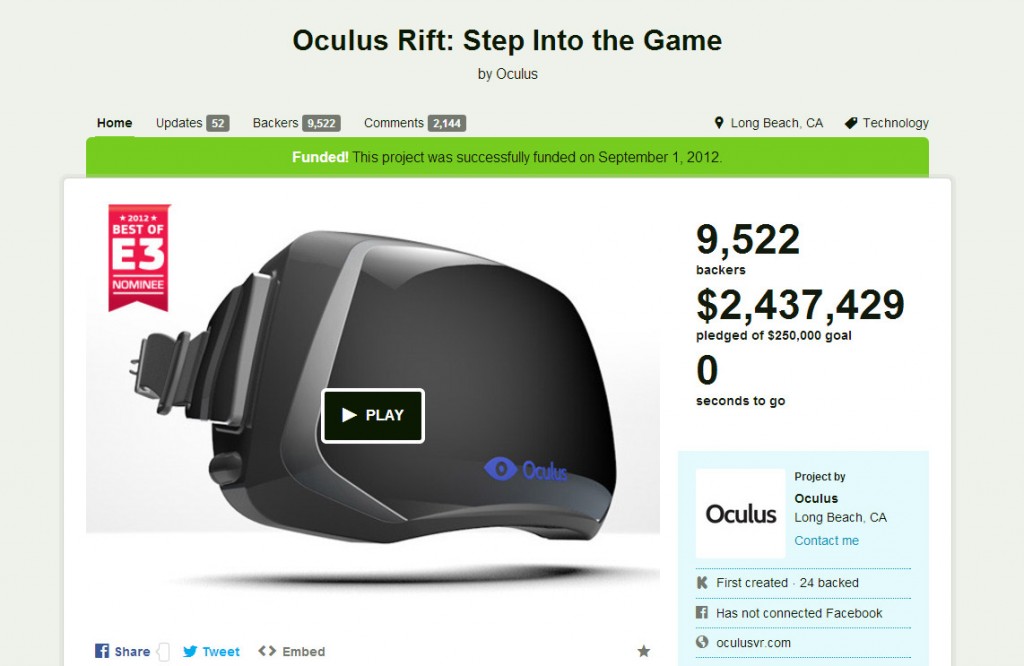 You backed this, and got this. What’s the problem?

While it would be a classy move for Oculus to offer its original backers a kickback now that it’s hardly cash poor, Kickstarter is not an investment scheme. Campaigns cannot offer financial incentives (though on other crowd funding sites, that is a possibility) and beyond fulfilling the rewards, the campaign creators are not beholden to “backers” in any way. Is it nice when a company continues to listen to and support early fans afterwards? Sure, and Oculus has done that over the past year and a half, but considering so many Kickstarter campaigns face endless delays and some don’t even send rewards before running out of money – just look at CLANG – Oculus did right by everyone.

Everyone still loves Tim Schafer and Double Fine remember, me included, but his company took eight times the original budget for Broken Age and still ran out of money, leading to delays, half a product and calls for more funding through early access to actually finish the project. That’s far worse than what Oculus is doing and Double Fine hasn’t received close to the amount of vitriol that Oculus has.

Even after everything I’ve said though, you’re still pissed right? I can tell. I am too if I’m honest and I think I know why – Oculus Rift just stopped being cool. Dare I say it, but we’re in danger of becoming technological hipsters.

I know it’s difficult to accept, but by being all uppity because the cool, startup, tech firm was bought by the giant corporation, is the same as that guy that stops liking a band because it’s in the charts. The Rift doesn’t stop becoming awesome just because Facebook bought the company that makes it.

Ultimately though, whether this sale is really a money grab by the owners, or a big middle finger to the earliest backers, or in-fact a real investment opportunity for a company that wants to make the best virtual reality hardware imaginable, while giant corporations like Sony are nipping at its heels, we’re just going to have to wait and see. It really is way too early to tell what’s going to happen here, but just remember this: just because you were invested emotionally in Oculus and its future, doesn’t mean pandering to you is what’s best for the company.

You aren’t its only customers, in-fact, you can’t be if it ever wants to something more than a curiosity you show your mates that had no idea VR existed. It’s been a cool run, but Oculus and its Rift is going to step out into the sunlight sooner or later and at that point we can either go with it and enjoy the minor props from knowing it would do well all along, or we can sit and grumble about how the owners sold out.