World’s most successful musicians want DMCA to have more power

Some of the world's most successful musicians, including the likes of Elton John, Bon Jovi, Taylor Swift and U2 have sent a petition to the United States congress, demanding the DMCA takedown system be given more power. As it stands, they claim to be concerned about the ability for musicians of the future to make a living.

The Digital Millennium Copyright Act (DMCA) allows musicians, studios and lobbyists to have content taken down from websites and search engines if it is found to infringe copyright. While this does work temporarily, the content is often just uploaded again, leading to a whack-a-mole like game of takedowns and uploads for most popular media.

While this annoys consumers just trying to view it, for many musicians that's a frustrating experience that many claim is hurting their ability to earn revenue through their music. And now 186 of them have complained to the U.S. congress, including some of the world's most successful and rich musicians, like Slash, Cee Lo Green, Linkin Park, Meat Loaf, Maroon 5, Cher and more.

“As songwriters and artists who are a vital contributing force to the U.S. and to American exports around the world, we are writing to express our concern about the ability of the next generation of creators to earn a living,” the letter to congress reads.

“Aspiring creators shouldn't have to decide between making music and making a living.” 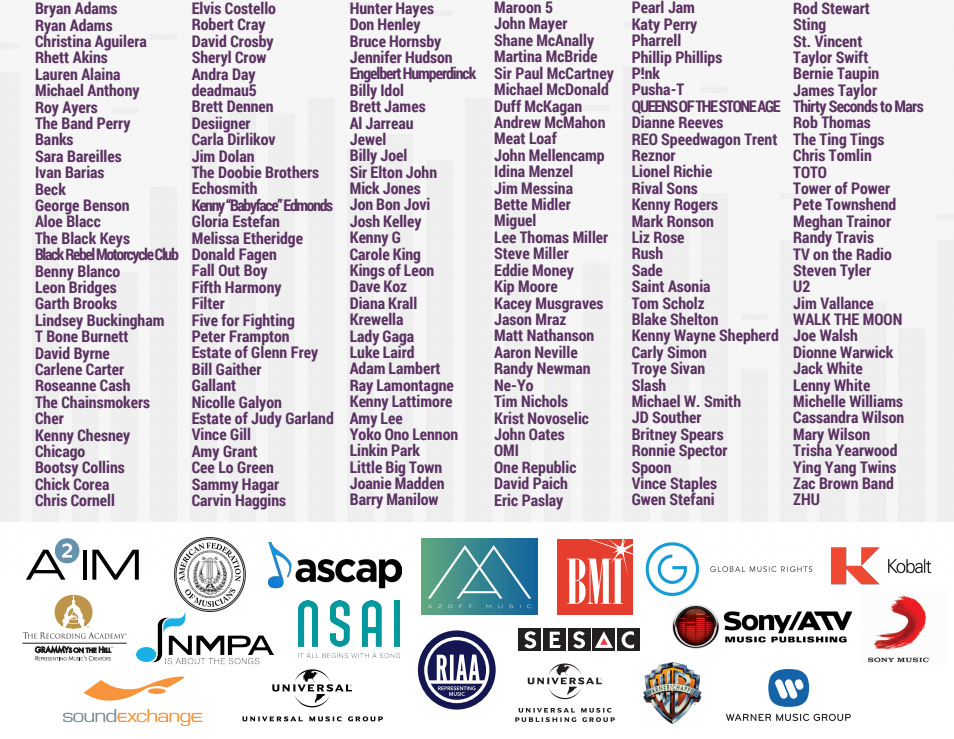 All of these guys feel like they're having a hard time.

They go on to claim that the DMCA takedown system doesn't work and that technology companies continue to benefit from the presence of pirated music, even though they proclaim to be doing much to prevent it. Moving forward the artists want the DMCA reformed so that when something is taken down it stays down.

“It's only then that consumers will truly benefit,” it reads in closing.

As TorrentFreak describes it, these artists and the music labels backing them, believe Youtube and other sites are running a pseudo protection racket, since they have copyright protected content on their platforms, but require the music labels to tell it to take them down. That gives those labels less bargaining power when it comes to licensing their content, they claim.

It will be interesting to see if congress avoids being starstruck and considers the important points of this debate seriously, or whether it just rolls over and gives in.

KitGuru Says: It really is laughable how this list populated by some of the most successful artists in the world are all crying about lost revenue. Very, very few musicians or artists of any description, can make a living doing what they love. These musicians can claim all day that it will benefit consumers more if they are compensated, but new musicians are now competing with every musician who ever lived.

There is consistently more music than ever before, which means the value of individual songs is lessened. That's why you need a hook, a good live show and a strong interaction with your fan base to succeed. These guys are all dinosaurs or puppets of the labels. No one is condoning piracy, but to cry poverty when you've already made it is ridiculous.