Since the primary objective of the Silencio S400 is near-silent operation, we have devised a simple series of tests to compare the acoustic performance with the case set up in various configurations.

These tests will involve taking sound level readings with our sound meter from approximately 300mm from the front of the case, at idle, under 100% CPU load and under 100% GPU load.

The following configurations will be used to test the affect they have on acoustic performance.

As with every case we review, thermal performance is important, therefore, we shall test this by running another series of tests to measure temperatures both at idle and under load.

With the Ryzen 1800X there is a 20°C thermal offset which needs to be applied, therefore we will use Ryzen Master to measure CPU temperatures while testing. We used the standard fan curves for both our CPU and GPU.

With the case in various forms of configuration we can measure what effect this has on acoustic performance: 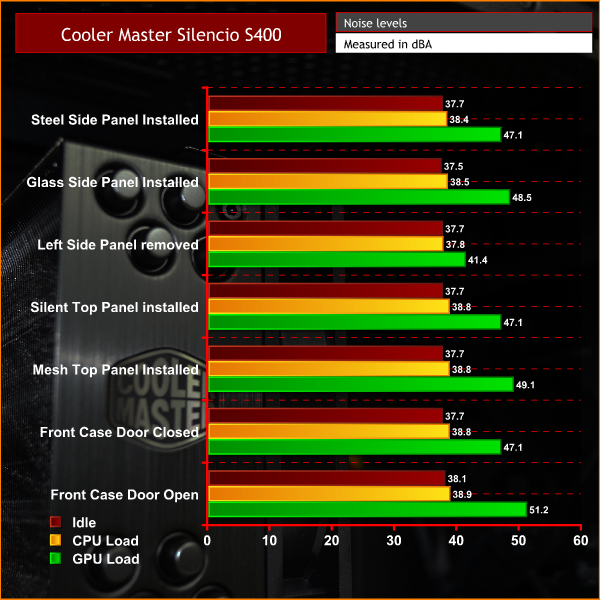 As we can see, acoustic output was barely affected by the various configurations we tested above. The most noticeable reduction in sound from the GPU was when the left side panel was completely removed. This may sound counter-intuitive but it was due to the GPU temperature reducing significantly as it was able to dissipate heat much better, therefore its fans didn’t ramp up nearly as high as when the side panel was installed.

The biggest increase in noise came with the front door open – again this was due to the GPU fans. Regardless of how the case was configured, there was minimal change in the noise output from the CPU. 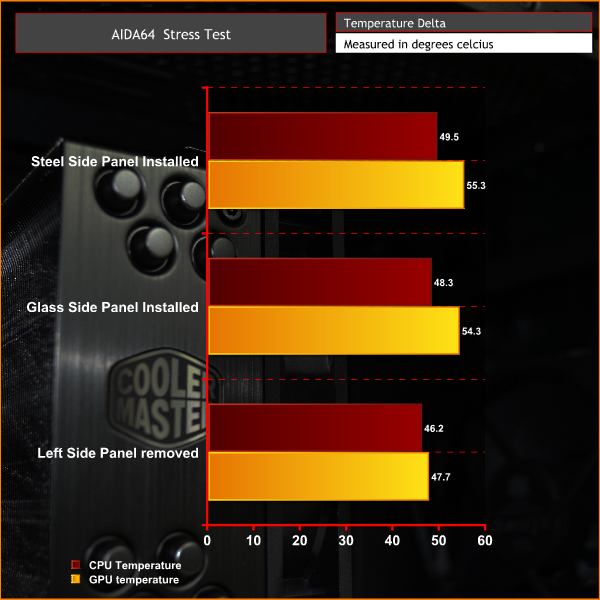 The results of our thermal tests follow a similar trend to the acoustics testing. It didn’t seem to make much difference whether we had the steel or glass side panels fitted. However, with the side panel removed completely the CPU temperature dropped by a couple of degrees. GPU temperature was most affected, with a reduction in temperature of 7.6°C compared to when the steel panel was installed,