Back in January, Cooler Master announced its new flagship series of PC cooling fans- the MasterFan SF120M. With these fans, Cooler Master aimed to design for pure performance, rather than flashy looks and now, the SF120M is ready for launch.

We first saw the SF120M fans at CES 2019 among a few other hardware launches from Cooler Master. The MasterFan SF120M fans are labelled as ‘industrial fans', so Cooler Master is likely looking to compete with Noctua here. The SF120M features a patented anti-vibration motor and a sound dampening frame design. A double ball bearing is used to reduce rotational friction as well for better performance and longevity.

As you can see in the image below, other design features include metallic shields for the fan frame and anti-vibration rubber corners to further minimise noise. In all, Cooler Master has aimed high as far as durability is concerned, which is helped by the use of industrial-grade components throughout the manufacturing process. 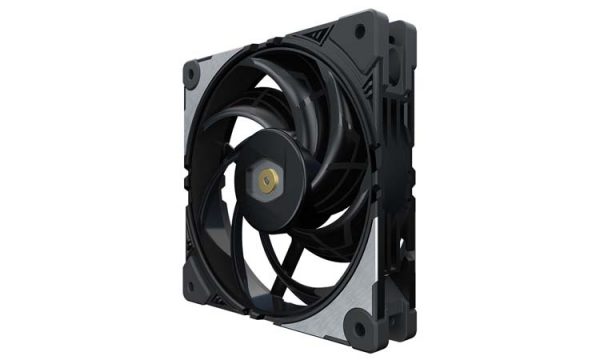 The MasterFan SF120M fan blades feature a connected design with and outer ring linking all the fan blades together, we have seen this from Cooler Master before with the exclusive square fans on the Mirage ML240P all-in-one liquid CPU cooler. The intended purpose of connected fan blades is to reduce fan distortion and improve rotational stability.

Another interesting design choice with the SF120M is the implementation of a detachable cable. Embedded into the fan frame is a micro-switch which has three PWM mode settings, labelled H, M and L. This switch allows users to swap between RPM modes, which select three different maximum speed profiles, ranging from 1200 RPM up to 2000 RPM. Other specs worth noting include the 4-pin PWM connector, a 280,000 hour MTTF life expectancy and a total power draw of 1.44W.

The SF120M fans are available in the U.S now for $29.99 with a 5-year warranty. Currently, we are still awaiting details on UK pricing and availability.

KitGuru says: With the likes of Noctua leading the way in the industrial PC fan market for a long time, can the MasterFan SF120M from Cooler Master shake up the competition?