Launched at CES 2020, the iCUE H115i RGB PRO XT is the latest iteration in the Corsair line of Hydro series all-in-one CPU coolers and for the second time in succession, Corsair has brought a CPU cooler to market without RGB fans! Could this be the beginning of the end for the RGB craze? Well, maybe not, since the RBG PRO XT range is designed to offer a combination of the high-performance components of Corsair's RGB Platinum range, with the understated appearance of the RGB PRO series.

Corsair has built the RGB PRO XT series with both high-performance cooling and low noise operation in mind with its dense radiator design and PWM controlled ML series fans. One thing that is noticeable in this day and age is that the RGB PRO XT series includes regular non-RGB fans, this provides a more understated appearance while slightly reducing manufacturing cost.

RGB lighting is still retained in the pump head, which is a very similar, if not the same design to the company's recent RGB Platinum AIO series. The iCUE H115i RGB PRO XT is the 280mm radiator version, the series also includes 240mm (H100i) and 360mm (H150i) versions too, which all utilise a CoolIT pump and radiator combination, just like the Corsair RGB Platinum series.

The RGB PRO XT pump head is equipped with 16 individually addressable RGB LED zones to produce customisable lighting effects that can be controlled and configured using Corsair’s iCUE software, or simply synchronised with the motherboard RGB lighting for seamless system integration. A dynamic In-game Lighting Effects mode that operates automatically when launching a supported game is also a feature of the RGB PRO XT series. 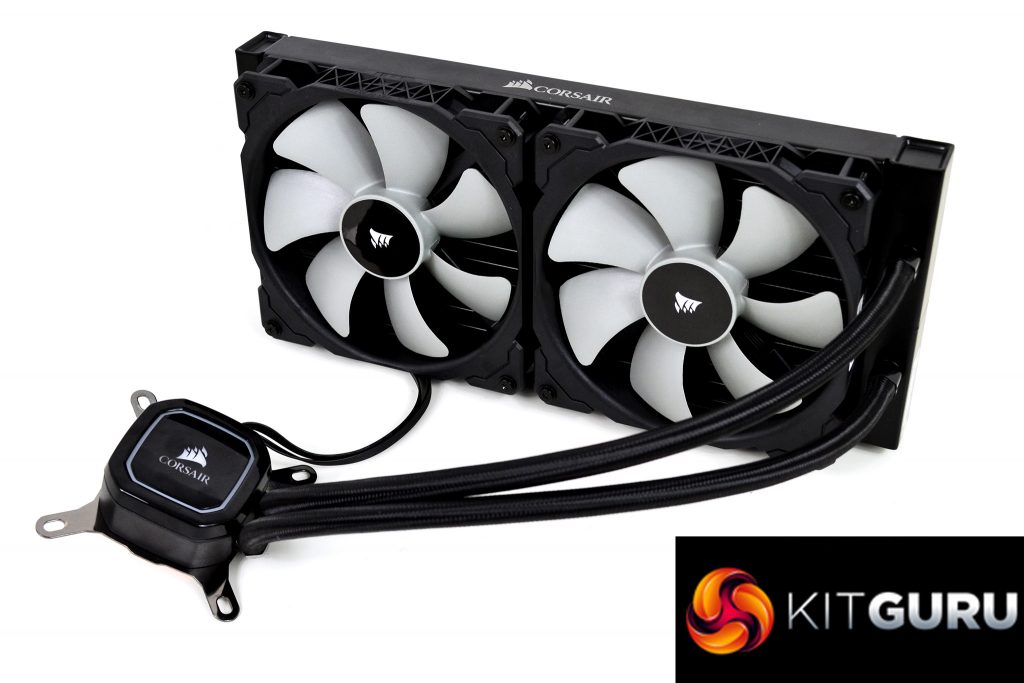 Configurable via the iCUE software is a zero RPM fan profile that allows the fans to completely stop spinning under a certain temperature range, for a completely silent operating mode. When the CPU temperature rises so does the fan RPM, a range of 400-2000 RPM is possible with the ML140 fans meaning under extreme CPU load, the H115i RGB PRO XT should have sufficient airflow to keep the temperature of high-performance processors under control.

Situated at the base of the pump is a high-quality copper thermal transfer plate with microchannels and a high-performance pump designed for low noise operation. Corsair has implemented a modular mounting bracket solution with thumbscrew fasteners that can provide a completely tool-free installation process for the pump block to reduce installation time. However, a Philips screwdriver will be required to install the fans on the radiator.

Another design feature of the Corsair H115i RGB PRO XT that will help to reduce installation time is the regular, non-RGB ML series fans. Since there is no RGB lighting built into these fans it means that there are also no extra RGB controllers to install and much less wiring to manage. Not only should this cut installation time, it will also provide a neater final appearance to the system.

The Corsair iCUE RGB PRO XT series offers consumers with more choice of competitively priced AIO coolers for their builds now. The H100i 240mm version starts at £114.99, the 280mm H115i is £132.99 and the range-topping 360mm H150i is priced at £152.99. All are backed by a 5-year warranty for peace of mind and offer an excellent range of CPU socket support including all mainstream Intel and AMD platforms, as well as HEDT socket TR4/TRX40.