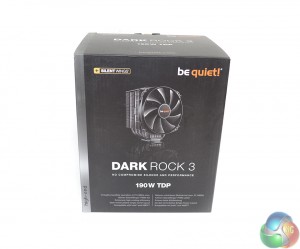 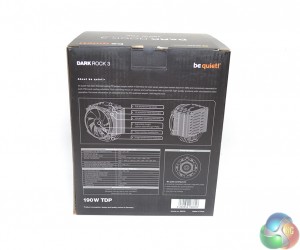 be quiet! ships the Dark Rock 3 in the company’s standard black packaging. An image of the cooler and its 190W TDP rating are outlined on the front of the box, with advanced specifications and features being listed on the rear. 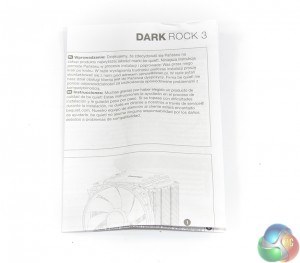 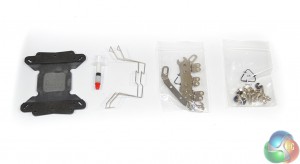 A detailed fold-out installation guide is supplied to assist users with the mounting process. The accessories bundle consists of mounting hardware for Intel and AMD, additional fan clips, and a 1g tube of thermal paste.

be quiet! opts for a sturdy metal backplate to minimise the risk of the CPU cooler moving or flexing one’s motherboard when it is mounted. 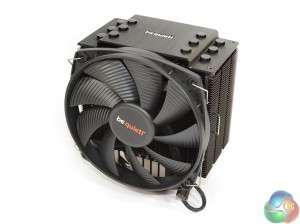 Providing airflow to the Dark Rock 3 is a 135mm SilentWings PWM fan clipped to the front of the single tower heatsink. Operating via a 4-pin PWM connector, the SilentWings fan can rotate at up to 1400rpm to shift up to 67.8 CFM of air with a rated noise level of 21.1 db(A).

Rubber strips are used to minimise the transfer of noise-inducing vibrations from the 1400rpm fan to the aluminium fin array. 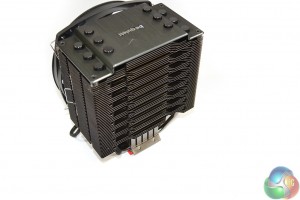 As was the case with the company’s Dark Rock Pro 3, be quiet! uses an unusual fin design on the heatsink’s back-end. Alternating grooves and extrusions are potentially acting as flow adjustment surfaces which allows the Dark Rock 3 to be optimised for rapid heat removal.

Another potential reason for the back-end fin design could be related to the cooler’s compatibility with a second fan in a push-pull configuration. The fin array structure would allow for optimisations to the airflow’s pressure gradient created by the rear fan. 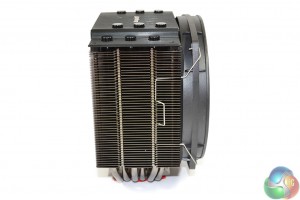 With its 73mm-thick aluminium fin array, the Dark Rock 3 has potential to cause interference with large memory heatspreaders. be quiet! combats the interference issue by allowing the front fan to be adjusted in mounting height.

The six 6mm copper heatpipes are split into two distinct rows through the heatsink. This allows efficient spreading of heat removed from the CPU; thermal energy will be distributed over a greater area of the fin array, ensuring that a specific location does not get saturated and bottleneck the heatsink’s performance. 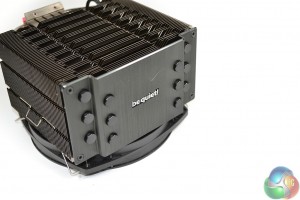 More for aesthetics and structural rigidity than cooling performance, be quiet! deploys an attractive aluminium plate on top of the cooler’s fin array. Proving that cooling performance is not the aluminium top plate’s motive, each heatpipe is separated from it via an insulating plastic cap. Moderation of heat interacting with the Dark Rock 3 from external sources could be another of the plate’s duties.

Embossed with the be quiet! logo and utilising a dark black colour scheme, the top plate adds an elegant touch to the section of the CPU cooler that will be visible when mounted in one’s chassis. 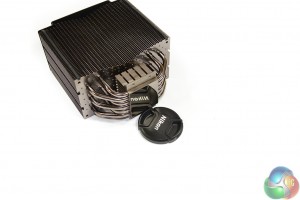 A highly-reflective nickel-plated copper base is used to transfer heat from a CPU to the six 6mm heatpipes. be quiet! opts for a solid base, rather than the heatpipe direct touch (HDT) alternative, to ensure that thermal energy is spread as evenly as possible along the copper block, allowing each heatpipe to contribute to cooling performance.

The aluminium fin array’s inwards-sloping front side and sharp leading-edges create a pressure gradient for air flowing into the cooler, which in turn can allow the flow to penetrate the cooling fins with greater effect.

A large quantity of small dots are present on each of the fin surfaces. Such additions increase the airflow’s turbulence, which in turn has positive effects on the heatsink’s convective heat transfer performance. In theory, the dots should add little (if anything) in regard to noise output, provided be quiet! has made the correct optimisations. Our acoustic performance results will allow us to gauge if this is the case. 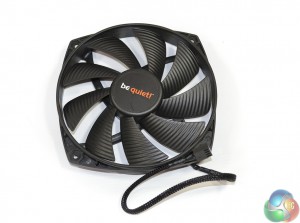 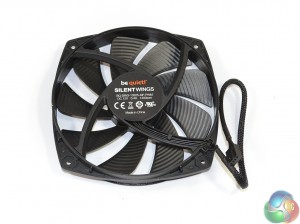 The 135mm be quiet! SilentWings PWM fan uses nine blades, each with a grooved structure, to optimise airflow levels at the relatively slow rotational speed of 1400rpm. This configuration has positive effects on noise performance; a sufficient quantity of air is transferred at lower levels of rotation.

Powered by a 4-pin PWM connector (on a braided 220mm cable), a six-pole motor powers the SilentWings fan and, according to be quiet!, allows for smoother transition between magnetic poles which results in fewer vibrations (hence noise). Also used for reduced noise levels and strong longevity is the fan’s fluid dynamic bearing (FDB).