We compared the be quiet! Dark Rock 3 CPU cooler to a number of competing models which include the same company’s Dark Rock Pro 3 and Noctua’s NH-D14, as well as Corsair’s H100i AIO liquid cooler.

It is worth noting that both the Noctua NH-D14 and Corsair H100i have received a large amount of usage over their lifetime. While we tried our best to clean the coolers and remove any dust, some dirt will inevitably remain and will have a small affect on the accuracy of our recorded performance (compared to a brand new unit). 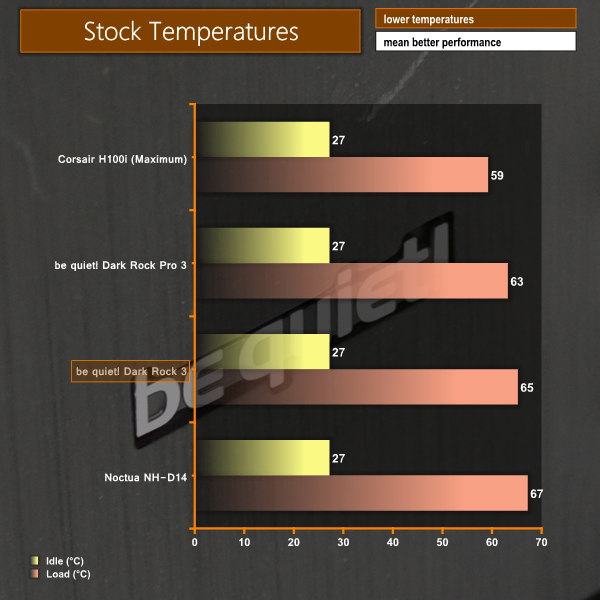 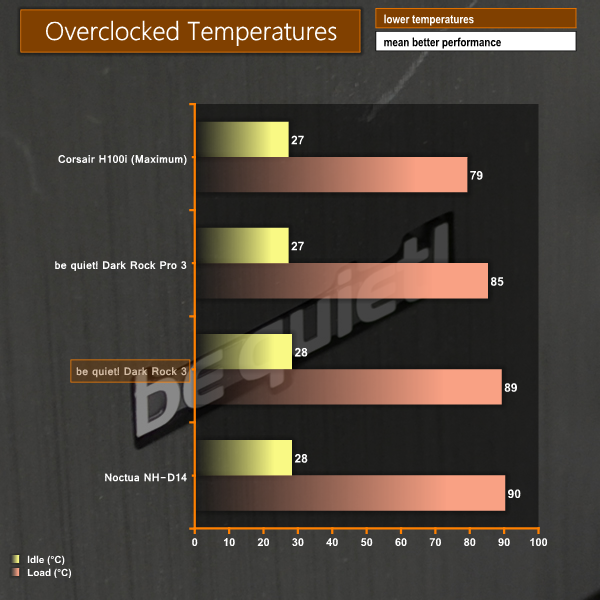 Positive performance numbers are put out by the Dark Rock 3 in the stock-clocked cooling test. The single tower cooler manages to perform within 2°C (3%) of its flagship brother – the dual tower Dark Rock Pro 3.

Our aging (and well-used) Noctua NH-D14 struggles to keep up with the be quiet! Dark Rock 3. As already pointed out though, the performance of Noctua’s NH-D14 should be interpreted with care due to its heavy levels of usage. None of the air coolers can compete with Corsair’s 240mm AIO liquid cooler in thermal performance.

Despite lacking one of its 6mm heatpipes, an entire fin array, and a secondary cooling fan, the Dark Rock 3 manages to maintain competitive performance against the be quiet! flagship in our overclocked test. With an increased load, though, the single tower Dark Rock 3 starts to see its performance tend towards a saturation point.

Nevertheless, outpacing our Noctua NH-D14 by a single degree, and performing within 4.5% of the dual tower Dark Rock Pro 3 proves that the be quiet! Dark Rock 3 has strong cooling performance, even at higher thermal loads.