While Advanced Micro Devices’ next-generation micro-architecture known as “Zen” looks very impressive on paper, it will not hit the market any time soon. In fact, AMD plans to release the first microprocessors featuring the new cores only in late 2016, according to a document published by a web-site.

AMD’s first “Zen”-based central processing units code-named “Summit Ridge” will only become available in October, 2016, according to AMD 2016 desktop platform schedule* published by BenchLife. The confidential document was presented to AMD’s partners on the 27th of March, 2015, and may contain certain inaccuracies. For example, the document calls AMD’s forthcoming desktop socket as “FM3”, whereas AMD’s official name revealed in May is “AM4”.

If the schedule is correct and up-to-date, then AMD is finalizing design of its “Summit Ridge” chip right now and still does not have fully-functional samples of the processor. 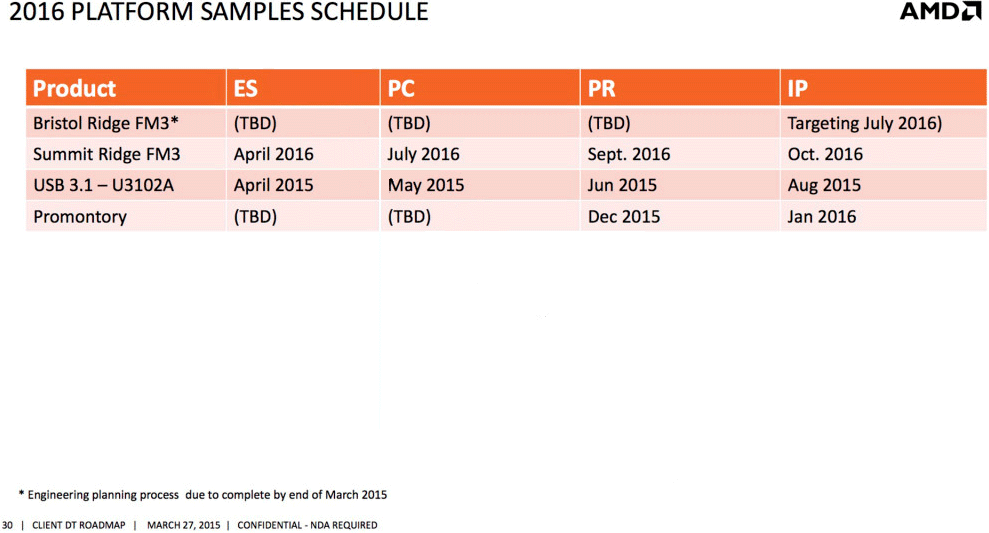 AMD expects to send the first engineering samples (ES) of the “Summit Ridge” central processing units to its partners in April, 2016. Engineering samples are usually fully-functional A1 revision chips that may run at lower clock-rates than the final products.

The A2 production candidate (PC) “Summit Ridge” processors that run at designated clock-rates and support all features are expected to ship to AMD’s partners in July, 2016. By September, 2016, AMD will ship A2 revision production ready (PR) processors with all the markings on them. The first central processing units featuring “Zen” cores will be introduced in October, 2016.

Nowadays high-volume production of chips starts between nine and twelve months after the initial tape-out. The A2 revision is usually the first commercial version of the chip for AMD. If AMD starts to produce its “Summit Ridge” chips in volume in July, 2016, it means that the company is finalizing its design right now and will tape the chip out in the coming weeks.

Based on unofficial information, AMD’s “Summit Ridge” processor has up to eight “Zen” cores with 512KB level two cache per core, up to 16MB of unified level-three cache, a dual-channel DDR4 memory controller, integrated PCI Express 3.0 x16 bus to connect to graphics cards, built-in PCIe 3.0 x4 port with NVMe and SATA support to connect storage devices and other input/output technologies. The CPUs are expected to be made using 14nm FinFET process technology (14LPP) at GlobalFoundries.

The authenticity of the document could not be verified, even though it resembles typical AMD’s documents for its partners and contains a number of facts revealed before or after its alleged publication date.

KitGuru Says: As expected, AMD’s “Zen”-based processors will not hit the market during the “back-to-school” season next year and will only be available for holidays. If the chips are significantly better than microprocessors offered by Intel Corp. in the second half of 2016, then AMD will sell a lot of them to enthusiasts, just like it did in 2003, when it released the Athlon 64 3200+ and the Athlon 64 FX-51. However, it also means that high-volume availability of “Summit Ridge” processors will only occur in 2017.

*Note: The image originally published by BenchLife has been altered for better viewing experience.