Earlier this week the first images of what claim to be Intel’s new 10th generation Comet Lake-S processors appeared on Chinese social media ahead of the highly anticipated launch which is expected to take place sometime in April.

Although rumours are circulating around the industry that Intel will unveil its 10th generation desktop CPU line up in April, this has still not been officially confirmed. However, that has not stopped images of potential Intel Core i9-10900K and i7-10700K processors appearing on the Chinese social media outlet Weibo.

Weibo user WolStame uploaded the blurry images of what are thought to be the new Intel 10th generation Comet Lake-S Core i9-10900K and i7-10700K processors earlier this week. The images from Weibo that were later regurgitated on Twitter by @9550pro didn’t reveal much other than intel Confidential markings on the integrated heat spreader denoting that these are early engineering samples. 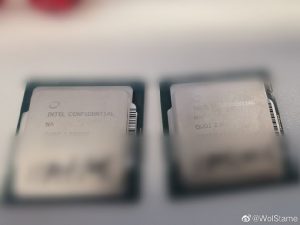 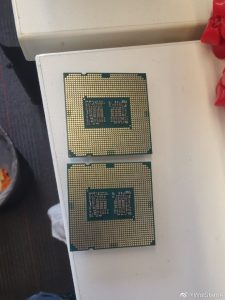 As well as the images of the top of the CPUs, there were also photos of the underside showing the pin arrangement. These images seem to confirm that the processors are built on the new LGA1200 platform and you can also see electrical circuitry arranged unlike any previous generation Intel CPU, that gives us an indication these may well be the real deal.

If the rumoured April release turns out to be correct, we could start hearing official details from Intel regarding 10th generation Comet Lake-S specification and performance, such as the increase in logical cores and alleged higher boost frequencies that have been circulating recently. The Intel Core i9-10900K is expected to launch with 10 cores and 20 threads, with rumours suggesting up to 5.3GHz Turbo frequency may be a possibility.

KitGuru says: Images claiming to be of the upcoming Intel Comet Lake-S processors surfacing online could mean we are getting close to an official release from Intel. What do you guys think of the latest round of rumours regarding Intel’s 10th generation Desktop CPU lineup?