You know how the saying goes, when in Rome, do as the Romans do. Well today AMD has been in Rome, Italy and in true Roman fashion there was a big announcement. We are not talking Chariots and Gladiators or such like, this is EPYC.

This afternoon, AMD announced a number of things, including a new addition to the 2nd generation family of EPYC ROME CPUs. The AMD EPYC 7H12 will be another 64 core/128 thread monster, this time boasting a 2.6Ghz base frequency and a maximum boost frequency of 3.3Ghz. Just like the current crop of 2nd generation EPYC CPUs, the 7H12 will be specifically built for HPC customers and workloads.

The EPYC 7H12 turns out to be AMDs most power hungry CPU ever, with a 280W TDP! Therefore, it is best suited to water cooled applications to ensure boost speeds are at a peak. ATOS has tested the CPU on its BullSequana XH2000 water cooled hybrid supercomputer. During these tests, the new EPYC 7H12 processor achieved a LINPACK score of  4.2 TeraFLOPS, which is an 11% improvement over the AMD EPYC 7742 processor. This comes as no surprise as the 7H12 basically seems to be an overclocked, water cooled EPYC 7742. 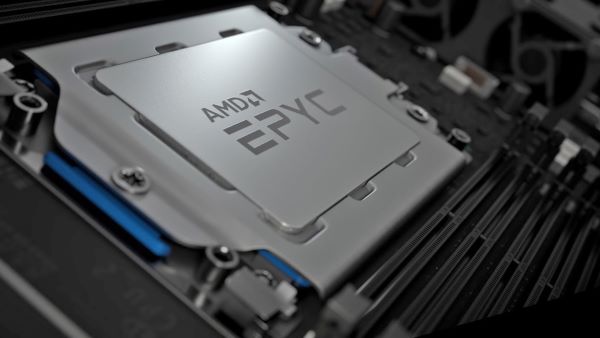 TMSC also announced its adoption of 2nd generation AMD EPYC to help power its next generation research and leading process technology among other things. Since this is brand new information we are yet to hear details of pricing, however, we will be keen to share this once we are informed officially.

KitGuru says: What are your thoughts on this news from AMD today? With rumours of AMD Threadripper coming thick and fast, does this show they are not afraid to push 280W TDP with that too?